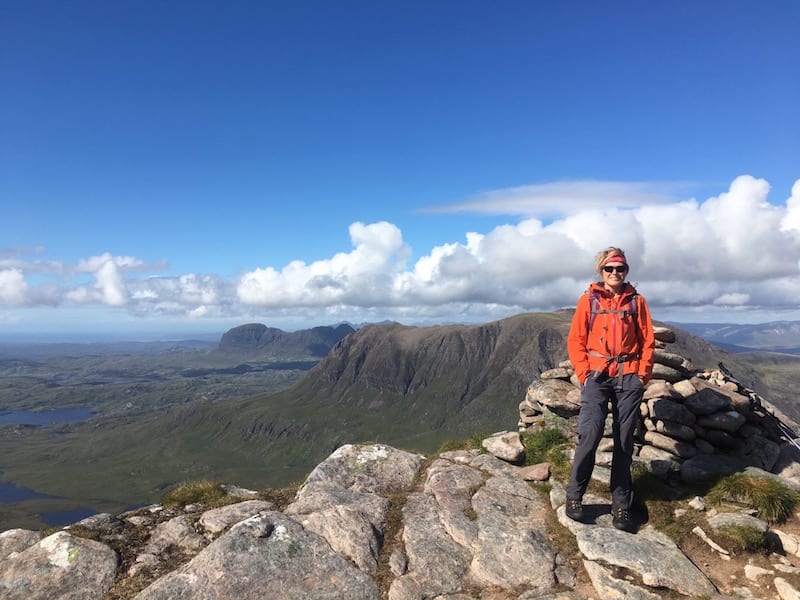 With fine weather forecast for the Summer Solstice 2019, I decided to join my Corbett bagging pal Rob for a hike to the 769m summit of Cul Beag. We had another adventure planned for the weekend, to packraft and camp on Suilven, so we chose a relatively short and easy mountain walk for the Friday.

The walk starts just off the A835, north of Ullapool and south of Knockan Crag. We parked in a small parking area on the other side of the road.

After a short walk on an old road, now hard-packed trail rather than tarmac, the route follows an ATV track and then a rough path towards the southern end of Lochan Fada.

We crossed moorland to the west, where we could see Cul Beag and the neighbouring Cul Mor looming ahead. The climb looked like it would be quite steep but the sun was out (after a brief spell of rain) and we were in no rush.

At this time of year in northern Scotland it hardly gets dark and although we set off in the middle of the afternoon we knew we had many ore hours of daylight to enjoy.

The route continued west with a mostly identifiable path. It was boggy in places but generally we could follow the path.

There were numerous small cairns created along the route. These annoy me. I don’t mind the occasional cairn placed as a waymarker and I like a summit cairn, but why do people feel the need to create multiple mini cairns all along an obvious path? They look like littering to me. (Sorry if you think I am being a bit grumpy.)

There is a choice to head over Creag Dhubh, or cut across to the west towards the start of the climb over the first larger hill of Meall Dearg.

This is where things became a bit rougher and steeper. There were sections of path and we stuck mainly to these although at other times we tramped through heather and over rocks.

After Meall Dearg at around 650m, the terrain flattens for a bit and we could see the summit of Cul Beag still high above our heads.

Before the final push, there was a section of descent and then more steep ascent to reach the cairn at the top.

The views from the summit are breath-taking especially nearby Stac Pollaidh and across land, numerous lochans and towards the sea and multiple islands.

The evening sunshine bathed the impressive scene and we stopped for a while taking numerous photos.

We returned via the same route. It had taken us around 3.5 hours. See Walk Highlands Cul Beag route.