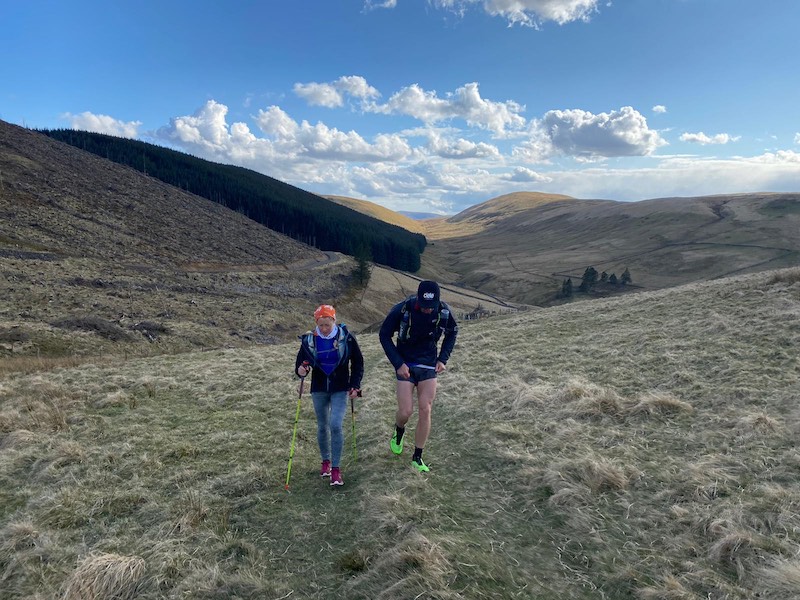 Anna and Jack Scott, who holds the male FKT for the 214-mile Southern Upland Way.

It was Jack’s run that ignited the idea of a Southern Upland Way (SUW) record run for Anna. She says: “My husband Neil helped Jack with his record attempt and it put the idea in my head. But having just given birth I wasn’t sure it was even possible. I am really proud of my time.”

Jack was also Anna’s support runner for 30-odd miles and Rosie, who set her time during the Ultra Great Britain race on the SUW, was one of the first to congratulate Anna on her new time.

Anna says: “This is what I love about the running world. It was very special having the male record holder run with me and it was great that Rosie also congratulated me.”

Who is Anna Rutherford?

The 38-year-old runner , originally from Milngavie, East Dunbartonshire, lives in Eddleston, in the Scottish Borders. She is mum to Kit, who is two, and Ella, who is nine months. Anna is as a lawyer and she is currently on maternity leave.

Anna says: “I remember saying to Kit before I left, ‘mummy is just off for a run she will see you soon’, which is what I always say before going for a run. I was in tears because I knew it would be days before my run finished. It broke my heart to leave them as I’ve never had a night away from them before.”

Anna has previously won the 235-mile six-stage Deadwater race, which extends from Scotland to Wales. She is a winner of the White Rose 100, too. She adds: “I’ve done the Courmayeur-Champex-Chamonix before and a few local races, such as the Glentress Marathon and Tweed Valley Ultra, which I won. I’ve also completed a few triathlons and I came second in the City to Summit event, but that was ages ago.”

The SUW is 214 miles (344km) and heads coast-to-coast in southern Scotland from Portpatrick in the west to Cockburnspath, via the hills of the Southern Uplands.

Anna describe the run as her “post-baby goal”. She adds: “I wanted to show my kids that they can achieve their dreams and that whatever they want is possible. I was able to run this because I’m a mum and a wife and not in spite of having kids.

“I also had unfinished business as I was meant to run Wayne Drinkwater’s Ultra GB race on the SUW the first year he organised it in 2018, but I found out four days before I was due to start that I was pregnant with Kit.”

Now the mother of two young children, Anna has continued an impressive training schedule. She runs around 100 miles of running each a week, with a week off every four weeks. She did a long run of 50 to 60 miles weekly as well as strength training and Pilates.

The SUW FKT started on Thursday April 29 at 5am. Anna ran west to east.

Anna reveals there were many highlights of her record run on the Southern Upland Way. She says: “One really memorable moment was seeing a stranger about 10 miles from the end who came up to me and said, ‘You’ve been on Twitter. Can I run with you for a mile? It made me very emotional to feel like my run – which is nothing really – was being talked about and making a difference to people.”

Anna was thrilled to spot 12 deer as it was getting dark on the first night of the route as she climbed up to the Striding Arches sculptures.

She cried with joy when her husband and children popped up along the route to se Anna. She says: “I don’t know how Neil made it happen but he managed to meet with me twice on the route. I couldn’t stop crying.

“Seeing Kit running towards me saying ‘fast fast’ – he always says that when he runs and he’s so cute! – was the most special feeling in the world. I loved the gummy smile from Ella with her pulling my hair trying to figure out where mummy had been.”

Of course, the finish point was also emotional. Anna says: “My support runner Richard Edge was saying to me that we were going to finish before he was even due to have started that leg. I was so far ahead of schedule it was beyond my wildest dreams, which mean that while Richard was due to start the last 33 miles with me at 10pm on Saturday by then I’d got home and showered.”

It was when Anna spotted the support van five miles from the finish that she felt she could relax. She says: “I said to my van support – Steve and Izzy – that this was what I’d been waiting for for months. Getting to the point when I knew I’d done it.

“There were lots of tears and Izzy just pushed me off on to the trail and said that’s it, next stop the finish line. She and Stevie were remarkable in terms of support.

“I couldn’t have done it without the team of people I had. They were all friends before and they are all even better friends now. These are people who have done so much for me that I can’t put it into words. I’m truly humbled.”

Tough times on the SUW

Running so far non-stop is incredibly tough both physically and mentally. Although Anna reveals her legs felt okay, she said the rest of body is a mess. She struggled with lack of sleep and found it difficult to eat.

Anna says: “During the second night, I lay down to sleep on some grass because I was so broken. Jen – my support runner – gave me four minutes and I literally lay down and fell asleep. It was -1C and we were freezing but I couldn’t move forward anymore. I was swaying and not making sense. It felt like I was outside my body.

“When I got to the van after that section I was so cold, so tired and so emotional but they sorted me out. Stevie made me get completely changed and I slept for 22 minutes. We had alarms set and all the sleeps were 11 or 22 minutes with maybe two hours of total sleep. Then off I ran again.”

She also endured a spell of being sick. She says: “Being sick was miserable but Lucy Colquhoun, who is a remarkable person and remarkable athlete, was there and she knew exactly how to get my stomach back on track.

“She gave me crushed stock cubes to put my fingers into and suck, plus salted riced cakes to nibble and she was spot on. She reset me.

“Honestly, I did nothing. It was my support team who did all the work.”

Despite the difficulties, at no point did Anna let herself think she wouldn’t finish. She says: “I was so determined to finish. I was determined to make my family proud and to make myself proud.

Days afterwards, Anna describes her body as being in a mess. She says: “I have stomach pains, mouth ulcers and an eye infection. I was peeing blood, too. But my legs feel okay -ish so I’m trying to rest as much as possible with two young kids.

“I’m so bowled over by the reception and support I’ve had on social media that I can’t really take it in. I’m not special and I’m so normal. I’m just someone who likes running. I’m a mum, a wife, a daughter, a lawyer and I’m just Anna! It makes me feel proud and very humbled to have achieved this run.”

She reckons it is her nana and her husband who are the key to her success. She says: “I have my nana’s determination! I am also very lucky to have Neil, who is also a runner and whop supports my dreams. He always believed in me and probably more than I believed in myself. He’s a very special man.”