Stunning ski touring in the Cairngorms 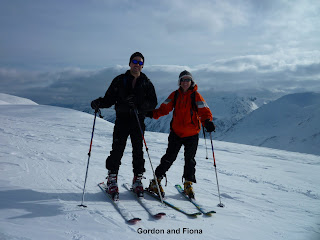 The G-Force and FionaOutdoors on their first ski touring adventure
I had never tried ski touring before. I’d imagined it to be a duller version of downhill skiing, and certainly nowhere near as thrilling as snowboarding. But after Friday’s outing in the Cairngorms I am hooked.
Indeed, according to various people in the know – including the very friendly and accommodating chaps at Mountain Spirit in Aviemore who hire the skis – ski touring has seen unprecedented growth this year in Scotland. Of course, this new trend will have a lot to do with the amazing snow conditions (the best in decades, say many). But it could also be due to the fact that on touring skis you need only your own energy and direction to head off into the mountains. There is no requirement for lifts, funicular trains or even groomed pistes.
What you do need as a novice, however, is an experienced ski touring leader. Heading off into the winter mountains can be extremely dangerous (as I recently found out while Munro walking). Which is how the G-Force and I found ourselves following in the ski tracks of friend and fab skier Super Stu MacBroom (and his girlfriend) on Good Friday.
Having spent many days this winter trudging through knee-deep snow to bag a few more Munros, it felt utterly enlightening to be gliding over the top of the snow. But there was a weirdness to this activity that took a while to embrace. Thanks to the “skins” that are attached to the bottom of the skis it’s possible to glide uphill. A certain amount of technique and rhythm is required to fully master a smooth progression up different angles but in only a short time both the G-Force and I were happily skiing, well, uphill. I had never imagined it would be quite so simple but there we were heading out of the lower car park at the Cairngorm Mountain Centre and upwards towards the first summit, Cairn Gorm (at 4084ft the sixth highest peak in the UK). 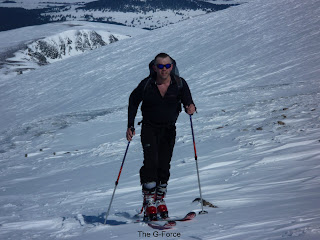 This is not to say that ski touring is easy. It does require a good level of fitness and it certainly gives the muscles in your legs, bum and hips a huge workout. Because you also use poles to help with the propelling motion I found that my arms and shoulders were given a good pummelling, too. But on skis we did manage to cover a lot of miles in just one day. 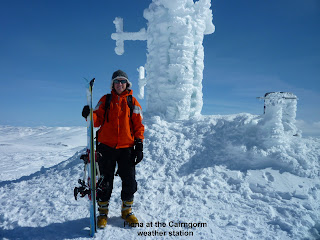 By lunchtime we’d reached the summit of Cairn Gorm and then a couple of hours later we skied up to the top of neighbouring mountain Ben MacDui, the second highest peak in the UK. 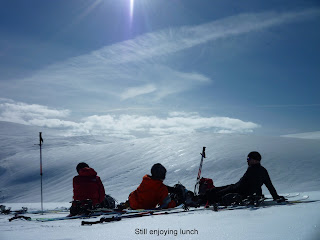 Thanks to gorgeous clear blue skies the views of the surrounding mountains, including many over 4000ft, were out of this world. In fact, it is hard to imagine views more stunning than the snowy landscape that lay for many, many miles before us. 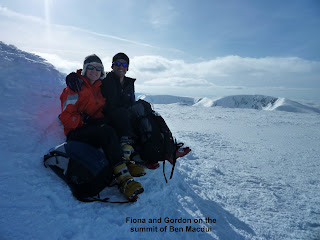 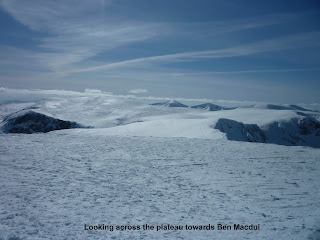 I was also fascinated by the way that the wind had created a snowy landscape that looked akin to sand dunes made of caster sugar. As Super Stu reminded me (he knows masses!) this is know as Sastrugi. For much of the adventure I felt as though we were skiing across a fabulously large “iced cake”. How very fairy tale! 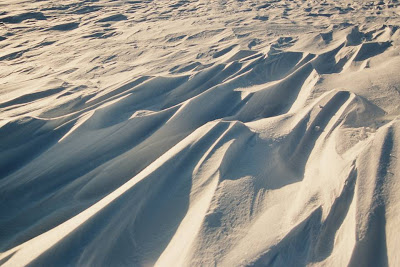 A picture of Sastrugi
And then it was time to head downhill. While we had removed our skins a few times during the day to descend short sections of the Cairngorm plateau, it wasn’t until the final hour that we could truly appreciate the amazing opportunity to ski off-piste in such wonderful wild surroundings. The only problem was that as a snowboarder my skiing experience is limited and so the downhill became something of a challenge. Skiing downhill over a landscape of windswept “icing” is a lot trickier than I ever imagined. 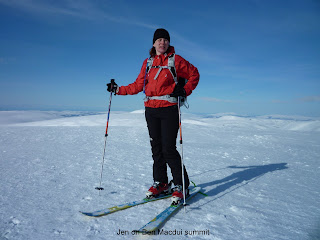 While I watched in envy as experienced skiers Super Stu and Super Jen carved beautiful tracks over the snow, the G-Force and I were forced to plod a less than pretty and only just effective route back to the bottom of the mountain. We were so much slower and so much less relaxed than the Super Skiing Couple! By half way I found my thighs were screaming with exhaustion, by three quarters of the way down I thought all the muscles in my body would explode and during the final few hundred metres I thought I’d never ever reach the car park again. But eventually I did – and then I suddenly felt a huge burst of exhilaration at what I’d achieved. (I think, too, that my skiing had suddenly improved immeasurably thanks to the many challenges of off-piste snow!)
During my first ski tour adventure we’d summitted two of Britain’s highest mountains, enjoyed a day of great chat, seen Scotland’s landscape at its best and had a physical workout to beat almost anything else I’ve done. You can understand why I’m now hooked!
Share