Isabel and I race to the end of the bike section

And, so, despite a week of anxiety over my very tired legs, Sunday’s Peebles Triathlon arrived and I woke up feeling just about fit to enter the race. Well, put it this way, it no longer hurt my leg muscles when I:

a) sat on the toilet

The previous weekend’s cycling and Munro bagging had definitely been the wrong thing to do a week before a sprint triathlon but there was little I could do about it so I just thought I’d give the Peebles event my best shot.

Anyway, enough of the excuses. “It’s only a sprint,” I hear half the Glasgow Tri Club shouting at me! And it was thanks to the fab coaching at the Glasgow Triathlon Club, in particular the Mighty Vickster, Duggiepedia and Super Smart Mike, that helped me to achieved my best ever 750m swim. I did this in 14.07. Most people at the GTC would slaughter that time but it was 30 seconds faster than I’ve ever swam and minutes faster than my first ever attempt some years ago so I was extremely pleased. 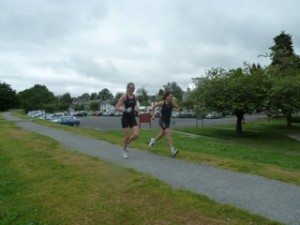 Isabel and I chat as we run the 5k!

My bike ride of 12 miles went quite well, too. I have to thank the G-Force for pushing me to improve my speed and strength on a bike. Not only do I have to keep up with him on longer-distance outings but he’s taught me how to punish my legs on the hills, use the gears to better effect and just smile through the pain.

Huge thanks also go to fellow competitor Isabel McGorum, of Peebles. This feisty Spanish mother-of-three pushed me to ride as fast as I could. Throughout the whole out and back cycle section we chased each other, overtaking then being left behind, then over-taking. Thanks to my ridiculous competitiveness there was no way I would let her beat me to the end of the ride and so I nearly burst my legs and lungs speeding to the second transition. (We ran some of the run section together and Isabel, 44, told me: “Cycling is my forte but I’m not so sure about the running. You helped me to keep going on the ride and now I’ve just to get around the run. It’s very hard though isn’t it?!”)

Overall I did the third fastest cycle time of all women in the event (both seniors and vets) and managed a fairly respectable 37.11. (I was only 50 seconds behind the G-Force on the bike, which really goes to show how much he’s helped me to push my cycling boundaries.)

Coming off the bike my previous weekend’s excesses started to catch up with me and I suffered terrible cramp in my calf muscle. This has never happened mid-race before. The first lap of the 5k run course was painfully slow for me but the second lap was better and in the final 1k I began to feel the strength and determination returning. I probably lost some time chatting to Isabel during the run (I know, I know, I shouldn’t have the breath to chat!) but we were enjoying ourselves and it was nice to swap stories.

My overall time was 1hr 18 min and 6 seconds (I have done faster at Peebles but after proper preparation!). I was 4th lady veteran (aged 40 to 50) and 7th lady overall. Not bad for an old bird, I reckon! 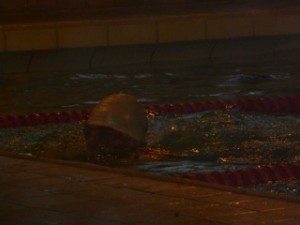 The G-Force makes it through the swim. He never imagined he would!

Peebles was the G-Force’s first triathlon. His swimming is his weakness but he’s worked hard over the last few months at GTC training and managed a much better than expected 17.20. I was thrilled that he went under 18 minutes. His cycle was one of the best at 36.21 and his run was faster than mine in 21.47. Overall his time was a respectable 1.19.26.

Amazingly I actually beat him overall! It was thanks to my swim and my better-than-expected cycle. We also had our mummies and LMO cheering us on, which was a huge boost. 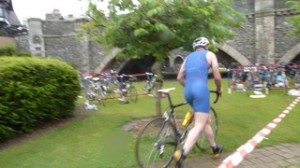 Transition 1 for the G-Force. The swim to the bike. NIce borrowed tri suit!

No doubt this will give the G-Force something to aim for next time. He said there would be a next time! And having completed one triathlon he’ll be better placed to go for it in his second. I’ve heard that Eyemouth Sprint Triathlon is very beautiful so we might go for that one. But first we have the Bealach Mor to train for. Ouch!

Another notable achievement was Eager Eddie from GTC. He did his best ever sprint triathlon time knocking many minutes off his overall time to come in at 1:14:06. His swim time of 13:26 was awesome. I am very jealous!

The Peebles Triathlon is well organised, has a great atmosphere and offers a lovely course. I’d thoroughly recommend a triathlon that takes place in my home town.