The Dads complete the Caledonian Challenge 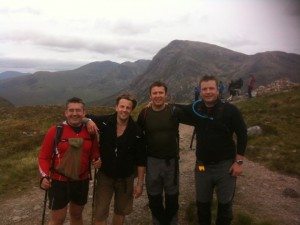 The Dads, aka the Bog Hoppers, during the Caledonian Challenge 2010

Sophie’s Dad didn’t need to say a word. His shuffle-limp-grimace walk that brought him into the assembly room this evening for the primary school’s musical evening pretty much said it all. The rest was conveyed as he gingerly eased himself down into the chair I’d reserved for him (at the front so he could stretch out his weary legs). There was that “ouch” point as he hovered three-quarters of the way into his seat – followed by an “ahhh” as he finally found himself seated and reclined.

“So did you enjoy the Caledonian Challenge then?” I asked. “Oh, yes, it was much better than last year,” replied Sophie’s Dad. “I am in much better shape. I only have blisters on my little toes this time – oh, and on my ankles, too. And this time I can walk, whereas last time I couldn’t really think about walking for days, not without assistance. I’m tired, but not as tired as last year. Psychologically I’m much better as well. But I’m definitely not doing it again next year.”

“That’s what you said after last year’s Cal Chall,” I replied.

“No, I am definitely not doing it next year,” he retorted.

But as he said this Twinnies 1’s Dad came up beside us. Wearing flip-flops (clever move for blistered feet), Twinnies 1’s Dad assured us he was fine. “A bit tired, but nowhere near as tired as last year,” he said.

“And I can walk this year,” he added. “That’s so much better than last year!”

I blogged about the group of Dads (joining Sophie’s Dad and Twinnies 1’s Dad was Twinnies 2’s Dad and a pal of Twinnies 1’s Dad), who took part in the Caledonian Challenge 2010. This annual event, on June 12/13, heads non-stop for 54 miles along Scotland’s famous and original long-distance walking route, The West Highland Way. The challenge lasts for up to 24 hours and is painful and tough. It does raise  thousands of pounds for charity every year, which makes the pain  worthwhile (well, you wouldn’t contemplate it otherwise!). This year The Dads, aka the Bog Hoppers, have so far raised more than £2300 for charity.

I can still recall Sophie’s Mum describing the pitiful state of Sophie’s dad following last year’s Caledonian Challenge (his 2nd time!). “He can’t move from the sofa. It’s been days and still he lies on the sofa complaining about how sore his feet are and how he can’t possibly move.. and could I just get him this and that?” She didn’t seem that amused. “If he says he’s doing it again next year then I’ll throttle him,” she added, smiling wryly.

But then, when Sophie’s Dad announced earlier this year that he would, indeed, be doing the 2010 event Sophie’s Mum decided that it would be better to join in the madness. And so, this year, The Dads were ably supported by The Mums. They were there at every food stop on the long walk challenge. They served up delicious hot meals (Thanks to Top Entreprenurial Mummy) to keep The Dads fuelled and replenished. They had cooling bowls of water ready to bathe the hot feet of The Dads.  They coated them with vital anti-midge spray. Without The Mums it’s unlikely The Dads would be just-about-walking a day after they finished this arduous challenge.

“They were all smiling as they finished the walk,” said Twinnies 1’s Mum. “That was a good outcome. The best you could ask for, really.  And remarkable given how far they had walked.”

The Bog Hoppers completed the 54 miles in a respectable 19 hrs and 7 mins and well within the cut-off time of 24 hours.

And so I return to this evening in the assembly room as we sat waiting for the pupils to begin their musical show. As Sophie’s Dad insisted: “I definitely won’t be doing it again next year,” Twinnies 1’s Dad looked ever so slightly wistful and seemed to mumble something along the lines of:  “Well, next year is next year so let’s talk about it later…” Then I see it. The flicker of “maybe” on the face of Sophie’s Dad. “No I’m not doing it again,” he said (again).

“Yeh, right, we’ll see,” I thought. I bet that come next spring, midway through a night of too much drinking, and The Dads will suddenly start talking about reforming for the Caledonian Challenge 2011. They’ll begin with an easy-going training schedule…

Afterall, if everyone remembered the hell of making it through the event the previous year then no-one would ever do it again. And Sophie’s Dad is a three-times Cal Chall Man!