Everything is relative and so the high and the low featured in this blog– and the next – might not seem that dramatic in the grand scale of ordinary life! In fact there were too many highs to recount during my fab week on the sports heaven isle of Lanzarote but this one high is worth a mention (and someone on Facebook has requested that I write about it!). 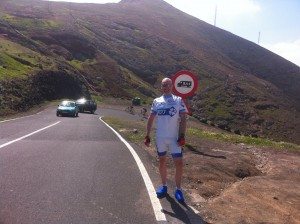 Take a closer look at this picture. In the foreground is Legs 11 (aka Craig).He has already made it to the top of the steep hill called Femes, disembarked his bike, found the time to strike a pose and had his photograph taken.

Meanwhile, in the background is the Ginger Prince and Me. As the pic was snapped, the GP is still just ahead of me. But as we rounded the final bend of this exhausting hill climb I found the leg energy to make a dash for the top. GP presumably had nothing left to give and so he was beaten. By a girl. And a girl with legs even thinner than his!

The GP will tell you that I had this planned. He’ll mention that his chain fell off at the bottom of the hill. He’ll want you to believe that I drafted him most of the way up the hill. He’ll want to explain that my bike is newer than his. He’ll no doubt have an excuse, such as he cycled harder and longer for the three days preceding the climb.

* I only wanted to make it to the top of the hill without getting off my bike.

The top of the notoriously steep hill climb at Femes, Lanzarote

* I had no intention of trying to beat anyone. Afterall most guys in the tri club are very fit.

* I have two less gears than on my old bike and so I had to grind my way up the incline.

* When we rounded the final bend I am sure the GP told me to go “right” and not “left” but I ignored him and carried on going uphill and left. The right choice!

* With just 30 metres to the top of the hill I saw an opportunity to overtake my tri club pal.

* I was sure he’d follow in hot pursuit but he didn’t.

* I make no claim to any records. I was slow. Slower than most. But not quite as slow as the GP!

For the record I’m only a teensie bit sorry for grasping the opportunity but it was irresistible! I’m sure the triumph is due to my lovely shiny, lightweight new bike! I know GP had cycled more miles than me over the previous days. I know GP’s strengths are not hill climbs. But it did feel quite good not to be last up that tough hill!