I’ve rarely found energy gels that taste good. They always promise such delicious flavours, such as strawberry, fruity, lemon and lime, but the result is usually very sickly or very bland. And the texture. I hate the texture of so many energy gels.

But energy gels work a treat in the middle of a race, or when you feel you can go no further during a run or bike ride. I have hit the wall too many times to forget energy gels when out training long-distance.

Until now I have tended to favour High Five gels. They taste ok and are easily digested without too much need for water. Because they are a bit more diluted you need more of these per hour of exercise, but I have found they are kind to my stomach. This is another big issue when taking on energy gels. Always, always test new gels in training, and before using them in a race. I have heard too many shitty (literally) stories. The 38g Energy Gels contains 23g, and some have added caffeine.

I also like Honey Stinger gels but had a terrible experience with the jellies (see below!). The Honey Stingers are outrageously sweet and again you need a few to get you around a long-distance event. One Stinger has 120 calories and 29g of total carbs, or thereabouts.

Another option is energy sports bars, beans or jellies. These are fine for cycling but I find it really difficult to chew and swallow these products while running. You can also go a long way on energy drinks but I tend to find these make me feel pretty sick after a few hours of exercise.

So I was pretty interested to be sent a new energy gel, the Kinetica Fuel Gel. Apparently the sports exercise specialists have got together with elite sports and performance nutritionist Matt Lovell, to create “Kinetica’s new concentrated fuel gel that is scientifically designed to provide athletes with a powerful sustained performance boost”. Their words, not mine!

And as Matt said: “While many gels in the market provide a caffeine boost we felt that very few provided anything else.  Therefore, adding some specific essential amino acids (for muscle recovery) alongside the carbs and caffeine gives a new dimension to this product”

The gels come in 35ml sachets and include about 110 calories and 27g of carbs. Plus 81mg of caffeine, which is about half of that in a 70z cup of real coffee. Again, that’s thereabouts.

These actually taste ok. I wasn’t keen on the Fruit Punch version, which tasted a bit cough mixture-ish, but the Stawberry and Berry flavours were remarkably nice. The cola flavour also sounds nice, although I haven’t tried that.

Proof is in the testing of energy gels 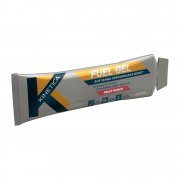 I tested the gels while cycling and running. Towards the end of a three-hour bike ride, when I’d eaten very little, one sachet gave be enough of a lift to get my tired erse back home. This is al relative because I wasn’t trying to break speed records, but I believe I did feel the boost of energy required.

I took one before a speedy 40minute run and I ran well. It might not have been the gel but then again it could have been. I felt light on my feet and full of energy.

I took a gel mid-way through a 90-minute run and again experienced enough of a lift to make it home. I wasn’t going that fast but I was covering more miles than I had done for a while.

During a slow and steady three hour run I took on board two gels. I found myself with enough energy to keep going, while also chatting and climbing a fair few hills.

The good thing is that the gels don’t seem to upset my stomach. You’d need to test them for yourself and if you’re in anyway sensitive to caffeine these might not be for you but I liked them.

I wonder if there is a bit of psychology involved because I have read so many times about the boost given by caffeine in sport. What I did find, however, is that twice, when I took the gels in the evening, I found it difficult to get to sleep later on. I generally do not have caffeine past 1pm and I usually have at most two fresh coffees a day. I am sensitive to the effects of caffeine so I’d recommend you try these during a shorter training outing before putting them to a bigger test.

The gels were also easy to swallow. They are quite liquidy and I did drink water while taking them, but I think it would be possible to have only a mouthful of water at the same time, so long as you didn’t do this too often in one event.

I can’t, for sure, say that these gels are better than others and it always comes down to personal preference but I would choose the Kinetica gels over others. They are priced £36 for a box of 24.  That’s £1.50 each, which is about average for gels I believe. Buy from Kinetica Sports