In a new series of blogs about barefoot/minimalist running I asked friend and runner Sam Ghibaldan to write about his experience of moving from regular to barefoot running. Sam is a friend and keen runner (although he does go on a bit about the day I ran him into the ground. Shame!).

My transition to barefoot running 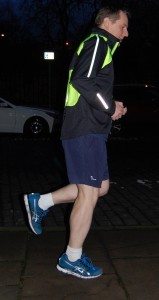 Want to try barefoot running? The name doesn’t exactly sell it. Even putting aside the joy of running over stones, cobbles and glass, there is weather to take into account. Where I am in Scotland, wearing shorts instead of running tights is a brave enough decision most of the year.

Perhaps that is why it seems there has been a concerted re-branding effort going on. The alternative name for barefoot running is minimalist running. Provided, of course, that you’re not actually running barefoot (and there are apparently a few people that do), minimalist running is a more accurate description, as it describes the flatter soles of your running shoes, which don’t have the built up, cushioned heels typical of modern conventional running footwear.

This, in itself, is enough to deter many runners from exploring minimalism further. It certainly put me off the first time someone suggested it to me a few years ago. I liked the protection and lift I thought my conventional Asics GTS shoes gave me.

The pain of regular running 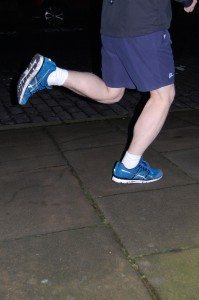 But then I hit a bad spell for niggles and injuries. For well over a year, I experienced significant knee and back pain after running. I tried a lot of things to sort my injuries, shelling out a small fortune going to the physio and doing months of prescribed exercises. Finally I took several months off running altogether. But still the knee pain persisted.

Eventually, I decided it must be age-related wear and tear and I just had to get used to it; I entered the Inverleith Park 5k and began gentle training. A few days before the event last July, I thought new running shoes might help; and that perhaps it was time I did the whole gait assessment thing again rather than just purchasing another pair of the same shoes. So I took myself off to Footworks (aka Snowlines) in Edinburgh. 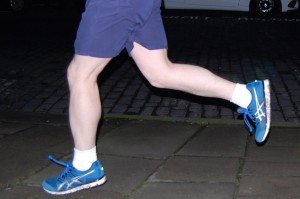 On entering the shop I had no intention of going minimalist. But a very patient and helpful assistant gave me a vast amount of her time to analyse my issues and try me out on a range of shoes. It was the minimalist ones that felt best.

What’s more, the logic of running, so that you land and take off from the front or middle of your foot, rather than heel strike, suddenly made sense; that way, the shock wave from landing on the ground doesn’t travel all the way up your body. (Ed: Most likely the cause of your sore knees and back?) 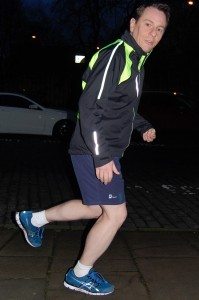 A lot of treadmill experimentation later I left clutching my minimalist shoes (more Asics, which generally seem to be designed for wider feet like mine, but this time Gel Attract 2). On the way out I noticed the helpful assistant looking very relieved. Surely an hour trying out running shoes is usual?

Like all new forms of exercise, minimalist running uses different muscles to heel strike running, or at least uses the same ones in different ways, so you are advised to start with small distances and build up.

It also turns out that running is habit forming, and that’s not a reference to endorphins. You have to re-programme the running instincts you’ve developed through your life, so that your mind tells your body to automatically land towards the front of your foot rather than the back. At the beginning, you have to think about that with every step.

Thankfully, it’s like switching to driving on the right hand side of the road when on the continent. After a few runs you find yourself minimalist running without thinking about it.

In the meantime, you’ve an instant reminder – calf pain. Prolonged calf pain. You feel your foot’s every movement through your calf, both at the time and after.

If you’re anything like me, your first minimalist time out you’ll start by doing a distance similar to your last heel strike run. Also, like me, you’ll probably only make that mistake once. After that you’ll follow the advice given to you and do short distances, building up slowly.

With minimalist running, you use your calf muscles far more than in the heel-strike style.  They need time to adjust and you need to develop their stamina.

The other physical change I noticed was my feet. Landing on the front of your foot uses different muscles to stabilise and these also take time to strengthen.

The joys of barefoot running 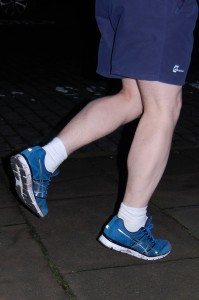 But a little patience pays off. After six weeks or so of minimalist running, I was relaxed in the style. Unlike some, I naturally prefer running in hot climates and a September holiday in Turkey helped me build my distance to around 8k by running nearly every day in the early evening heat. Although my pace wasn’t great compared to that before the change, I’ve increased both it and the distance significantly since then. My calf pain has gone.

But the question then must be: Was it worth it? For me, the answer is a resounding yes. Very rare twinges aside, I’ve had virtually no knee pain at all in the past few months and I’m able to run several times a week.

Perhaps, most significant of all, and now my muscles have adjusted, the minimalist running style does feel more natural, almost effortless on occasion. Just sometimes, I feel like I’ve hit the point that I could just running indefinitely.

It follows that I’d recommend that others give minimalist running a go, particularly if you’re trying to deal with injuries now, or avoid them in future. I just wish I’d taken it more seriously when someone suggested it to me a few years ago.

Find out more about barefoot running

There are a number of YouTube video clips online that offer advice on minimalist technique and it is worth sitting through a few of these to get to grips with the basics. There are also several books available, though true to form I haven’t got round to reading them yet.

But, most important of all, pick your shoes carefully and build distance and pace slowly.