Walking and talking is great for the soul, fitness and gossip – but rarely good for finding the right direction. And if you haven’t seen the person that you are walking and talking with for almost 30 years – not since school days, actually – then the chances are the navigation will be a little sketchy. Which is exactly how it was this week on the John Muir Way. 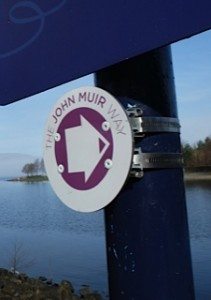 We set out to walk a section of the new John Muir Way (www.johnmuirway.org). This is not the previous John Muir Way, which is a walking route from Dunbar in East Lothian, to South Queensferry, near Edinburgh. Well, actually, the new route does follow the old route but then it marches onwards to cross Scotland to Helensburgh on the west coast. I’ll need to explain.

The new 134-mile walking and cycling trail is named after the Dunbar-born environmentalist, John Muir, who emigrated to America and made his name as the founding father of American national parks. His name is synonymous with conservation, the great outdoors, adventure, America, Scotland – and, now, a new coast-to-coast long-distance walking route in Scotland.

The launch of this new route is next month (on April 21) and will coincide with the centenary of Muir’s death, while also marking his birthday on April 21, 1838.

The route starts on the old John Muir Way and, then, at South Queensferry continues west via Linlithgow, Falkirk, Kirkintilloch, Strathblane, Croftamie, Balloch and to Helensburgh.

If you’re a walker or cyclist many of the route sections will be familiar, such as the canal towpaths from Edinburgh to Kirkintilloch and the West Highland Way. The John Muir Way joins up many familiar walking routes and creates a waymarked cost to coast route from the east to the west.

I have been following the progress of the development of the route and with only a month to go before the opening I decided to follow a section, from Balloch to Helensburgh, which I hadn’t walked before.

By coincidence my old school pal MB – a welcome re-meet through Facebook – was planning a work trip north from his home in the Borders and so we agreed to meet up. MB is a freelance photographer, which meant he could take the pics, while I muttered something about doing a bit of writing.

The only problem was that all the chatting, photography and muttering about writing meant we occasionally – okay, maybe just a bit more than occasionally – missed the vital signposts for the new route!

Our walk from Balloch to Helensburgh

Leaving our cars at the  seaside town of Helensburgh we jumped on the train to Balloch, via Dumbarton.The bonus of the John Muir Way is that many of the section start and finish points can be accessed via public transport.

From Balloch Station, we followed signs to Loch Lomond Shores, where the new John Muir Way marker signs are revealed.

A few words about these markers. They are quite small and often located way above or below eye-level and on posts that have been around for a while. At first, it’s difficult to spot these round markers but in time you become adept at seeing them.

Stick to the JMW signs, not the Helensburgh District signs

Also, the white arrows on a purple background should not be confused with other walk markers in the area (purple arrows on a white background) of the Helensburgh & District Access Trust. These latter markers do not go in the same direction and can cause confusion. Which they did!

Anyway, back to Balloch. Leaving the Loch Lomond Shores behind you should be sure to pick up the walking signs if you’re walking and the cycling signs if you are cycling. At first glance these markers look the same but they are not. This we realised some 1.5 mile off route – and after retracing our steps. (Obviously we also had a map to follow but when you haven’t seen a friend for 30 years the map isn’t always your first resource and little marker signs are.).

So, back at Loch Lomond Shores, after a pleasant enough detour on the cycle path that runs along the west side of the loch, we then found the John Muir Way walking signs and started out (again!). Look out for another marker sign on the right, high up on a post, before McDonald’s (we missed it due to more chatting and less observing!). The route then heads quickly into pretty countryside and the signs are far easier to spot.

I don’t think we could have been luckier with the weather. Surprisingly sunny pre-Spring conditions created one of those breathtakingly, deliciously scenic days that Scotland does so well. There was even a smattering of morning mist to turn Loch Lomond, the islands and the distant mountains into something even more magically splendid.

As we walked uphill we could feast our eyes on the views to the north-east, over the loch, and snap numerous photos of our first truly warm and sunny day of the year. MB’s photos will no doubt reveal the scenery far better than my words ever will.

The Balloch to Helensburgh route is nine miles in total and not overly challenging. There are some gentle and longer uphills and a couple of steeper sections but, on the whole, this is a manageable hike over generally good terrain. The way marking is mostly good although a section at around halfway in thick –  yet atmospheric – forest is tricky. Here, the markers disappear to be replaced by red and white striped tape tied around trees.

I am sure the route planners will be doing something to change these plastic markers in time for the official opening but for the meantime it’s a bit of an “adventure” as walkers weave around trees and through boggy terrain.  A walk leader that we met was chirpily replacing old tape and adding more where he saw fit so the route is there, if you know what to look for.

At the edge of this woodland mystery section, you find another reassuring John Muir Way marker firmly secured to a new wooden fence. After this, it’s a fairly simple case of following markers along wide and pleasant trails in Bannachra Woods as the path heads downhill towards Helensburgh.

Well, it would have been a fairly simple case if we had not been diverted mistakenly by a Helensburgh & District Access Trust sign. This saw us heading more than a mile off-route and on a seemingly brand-new trail. It was easy to believe this was part of the new John Muir Way when, in fact, it is a whole other route that heads in the wrong direction.

Again, of course, we should have consulted the map but what with all the chat we had to catch up on, the sign looking very similar to the JMW sign and the wonderful new-looking trail we ended up being tricked! Sunshine and great views made up for the mistaken detour and the extra miles actually gave us more time for talking!

The only disappointing part of this section is where the route meets the A818 and walkers are forced to stroll along the cycle path at the side of the busy road. It’s noisy and unattractive. On a bike, this part would whizz by but on foot it took too long.

My school pal MB and the walk photographer!

Just before Helensburgh, the John Muir Way goes off-road again and follows a pleasant trail into the top end of the town. The views over the shimmering sea before us were amazing, especially on a day when winter had not yet been erased from our short-term memory.

Helensburgh is where John Muir is thought to have set sail as a child with his family for a new life in America. Next month there will be a number of events taking place to mark the opening of the new John Muir Way and in memory of Muir’s work and conservation gifts to the world.

I would recommend the Balloch to Helensburgh John Muir Way walk, especially if the weather is good and you are with an old friend who is up for a long walking chat. Life/work is good!