The G-Force and I teamed up for the Artemis Great Kindrochit Quadrathlon 2014. It was a very challenging event that saw us completing an open water swim across Loch Tay (1350m), seven Munros, a seven-mile loch kayak and 35 miles around Loch Tay on our road bikes. We have so far raised £1050 for the two charities, Mary’s Meals and Mercy Corps.

Team FionaOutdoors: Smiling though the pain… Or is it just the thought of getting out of the kayak?!

The Kindrochit Quadrathlon is very tough and very long but it is also amazingly good fun and very uplifting.

It is surprising how far you can push yourself when you try. A few weeks ago, I doubted I would walk all the Munros, let alone the entire four disciplines in one go. But we did!

Although it’s competitive, fellow participants in the quadrathlon are also very friendly.

Starting fast does not mean you’ll finish first. Our tactic was steady for most of the way and to read the map carefully. It paid off very well for us.

Seeing so many men charge on ahead of us on the first Munro only to find them behind us by Munro four made gave as a wee chuckle or two.

The G-Force and I make a great team. We have different strengths that much to our surprise we found to be complementary.

The slog up Munro 7.

A friend told us on Munro 7 that we were far too happy to be taking the event seriously enough!

Smiling through the pain in my legs and shoulders (at different times and sometimes together) is better than crying. See kayak photo for proof!

Entry prices might seem steep – £300 per team for “early birds” or £440 for a full price entry – but I found out that this is incredibly good value for money. The catering, camping, entertainment, massage, support, ceilidh, fireworks AND the event are included in the cost.

The Quadrathlon goody bags are impressive and another part of the great-value-for-money entry.

The registration took hours and made my head hurt with all the thinking and planning but the organisation for the transition areas and the safety checks was exemplary.

I proved to the organisers that I can read a map, easily passing my registration navigation test. Sadly, many others did not do so well.

It’s perfectly normal to wake up at 3am on the day of the race with the heart-sinking realisation that you have not placed your (vital) gloves in the kayak transition zone.

Solutions come in all shapes and sizes. I ended up stowing my gloves in a dry bag inside the back of my wetsuit while I swam across the loch.

Thanks to coaching from Glasgow Triathlon Club and an extra session from Vicky Begg, aka The Mighty Vickster, the G-Force made the swim across Loch Tay with a smile on his face.

Loch Tay was apparently the warmest it has been for years. But I still found it to be very cold.

Finding somewhere to look during quadrathlon transition changes that does not include a dangling thingummy is very hard to do.

There are female changing tents in the Kindrochit Quadrathlon but few women seemed to bother with these. I put my Robie Robe to good use in T1, then a towel in T2 and by T3 I’d abandoned all concerns for hiding my modesty.

Dry clothes for each stage of the quadrathlon make the event so much nicer.

Walking up Munros 1, 2 and 3 was easier for me than for the G-Force.

Running down Munro 7 was much easier than we had both imagined – and reduced the length of time that we needed to feel the pain in our screaming knees and quads.

Chasing down a fellow GTC competitor, who was a last-minute stand-in for team Twa Shoogly Pegs, at various stages of the quad made the event all the more fun (and competitive). Thanks for your part in that Nick Green! 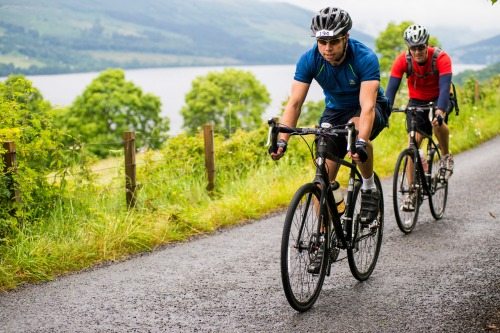 Cyclists dig in to complete the Quadrathlon.

A podium place is much more likely if you can read a map and follow a bearing from one Munro to the next. (Many thanks to the G-Force for his brilliant navigating.)

People will follow you on the mountains if you look like you know what you are doing! (We were trailed by at least 20 people between Munro four and five.)

The inclusion of six Munros in the Ben Lawers range in the Kindrochit Quadrathlon is hard enough. The seventh, Meall nan Tarmachan, is simply brutal.

I found out that I need new trainers. My Salomon Speedcross trainers have served me well through many months of training but they started to fall apart on the descent of Munro six. This was not good timing.

I saw only Inov-8 and Salomon off-road trainers during the event. Do tell me if you were wearing another brand…

Seven miles is a very long way in a kayak, especially when it’s a sit-on kayak and you have only managed 30 minutes of kayak training.

Getting up – and on to the bike – after a long kayak is painful and disorientating.

Hearing the commentator shout out that he had read my blog – and enjoyed it – as we transitioned from the kayak to the bike gave me a huge boost at a time when I just wanted to curl up and sleep.

There will never be enough gears on a bike during the Kindrochit Quadrathlon. The undulating round-Loch Tay ride was very hard indeed and mainly done thanks to my smaller front cog.

Low blood sugar can make me a tad grouchy 10 miles into a 35-mile bike ride after a swim, seven Munros and a kayak. But fish and chips served up by the support team at Killin does help. Surprisingly!

You can’t eat enough during such a long event. We took advantage of the many food stops provided and the amazing outside catering. But, still, we were hungry by the end.

Not eating enough can lead to a lot of trouble later in the event. We saw many people who could hardly pedal their bike due to exhaustion and lack of good nutrition.

With many riders pedalling slowly around Loch Tay, we felt like we were racing towards the finish line at the speed of the Tour de France pros. We were clearly delusional.

The incredible organisation, support, entertainment and catering teams are part of what makes the Wild Fox Events Quadrathlon such a superb event.

Slicing a watermelon in half is a unique and brilliant end to the Artemis great Kindrochit Triathlon.

The Glory Mums slice the watermelon to finish their Quadrathlon.

The Glory Mums were the first female team in 10.58 and 13th overall.

We were second mixed team in a time of 11.16. We are surprised and delighted.

The last team to complete the whole route, “It Was His Idea” came home in 16.32

After two mojitos (and 11 hours 16 minutes of racing) it’s ever so easy to suggest going for a goal of a sub-11 hour finish next year. (We’re still debating this!)

There was a bigger points to the event: Raising money for two very worthwhile charities, Mary’s Meal and Mercy Corps.  I found out that just £12.20 of money raised will give one child school meals for a year in Africa.

Me and the G-Force run to the finish. Pic credit: Marc Turner.

So far the Kindrochit Quadrathlon has played a huge part in raising an incredible £8 million for the two charities.

Trying to stay awake for the results and then the fabulous fireworks display after more than 11 hours of racing is almost as hard as the climb up Munro seven.

Thanks to the free massage after the event I could walk without too much pain the day after the Kindrochit Quadrathlon. Sadly, the following day I have a full-on dose of DOMS (Delayed Onset Muscle Soreness).

If you like big challenges  in a fabulous location, The Artemis Great Kindrochit Quadrathlon in Perthshire is well worth considering.

*Thanks to Ed Smith for the pics. And also to Marc Tuner.