The recipe for a great ski holiday

Fresh snow is always a bonus when heading off on a ski holiday – but it isn’t the only ingredient for a great skiing trip. There is a lot more to add to the recipe for a top skiing week. Here’s what I learned during a less snowy Christmas skiing week in the French Alps.

Even when there is little snowfall… the Alps will still open for business. When we arrived in La Tania (a couple of hundred metres below Courcheval 1650) it looked like high summer in the mountains.

But a short cable car ride upwards to Courcheval 1650 and then 1850 revealed plenty of snow and open pistes.

The resorts also worked overtime (and miracles) to make the best of the natural snow and to create more snow with multiple snow canons so that what little snow there was could be maximised for skiing.

It turned out that skiing and snowboarding was possible even when it seemed it might not be.

Listen to others… and seek out the open pistes with fewer crowds. During our Christmas week, the pistes that were open became very busy but with a bit of effort (and some walking!) there were quieter slopes to be found.

Enjoy the blue skies: When it’s not snowing in the Alps the skies are usually bright and blue. Compared to the dreary and overcast skies of winter back home, the Alps can be amazingly uplifting.

Facebook revealed that Scotland was suffering with a lot of rain and wind, so I smugly rejoiced in the blue sky and sunshine days of the Alps.

Learn to carve: When there is less snow, the pistes will inevitably be far icier. Being able to “carve” (that is, use the edges of skis and snowboards to gain better grip) aids a safe trip down the slopes.

If you can’t carve… stick to easier slopes (greens and blues) and become a top “side slider”. Being able to slip-slide down a steep slope is better than out-of-control skiing on busy slopes.

Ski when the sun is out: We quickly learned that icy slopes are far softer when the sun is shining on them between 10am and 2pm. So we skied at this time and hunted out the in-the-sun slopes.

Learn to ski: I have been a keen snowboarder for more than a decade but my confidence was badly knocked by icy slopes and too many falls (and big, sore bruises).

So, I hired skis and learned that skiing on icy slopes is a lot easier than snowboarding. I think I might now be a convert!

Hosts with the most: A good chalet with welcoming hosts will vastly improve a ski holiday with less snow. A friend recommended Ski Magic’s Chalet Chocolat, hosted by a wonderful couple, Sue and Pete.

Sue and Pete are by far the best chalet hosts I have ever had the pleasure to holiday with. We enjoyed fantastic food, great company, lots of thoughtful extra details and touches, great advice and many, many laughs.

Make new friends: Our chalet became the home to 10 guests for the Christmas week. Less snow meant more time for getting to know everyone. We enjoyed meeting new people and swapping stories about skiing, sports and general life.

Spot the keensters: One couple in our chalet, the Super Sleek Age Defy Duo, had already enjoyed a week of skiing before we arrived. The Super Sleeks will be returning for several more weeks over the coming season. So, they know the resort and wider Three Valleys area very well.

We listened to the Super Sleeks’ top tips of where to ski and tried to keep up with them for a day. We learned a lot from those keensters.

(PS. If I am as fit, athletic looking and as good at skiing as this couple in a decade’s time I will be very chuffed indeed.)

The shadow of a snow husky helmet cover.

Take a helmet cover!: My Headztrong snow husky helmet cover made me very happy. It kept my head warm on chillier days. It made me smile whenever I caught sight of it in mirrors, window reflections and as a shadow on the snow.

It also brought lots of praise from other holidaymakers and started many good chats in cable cars and on chairlifts. 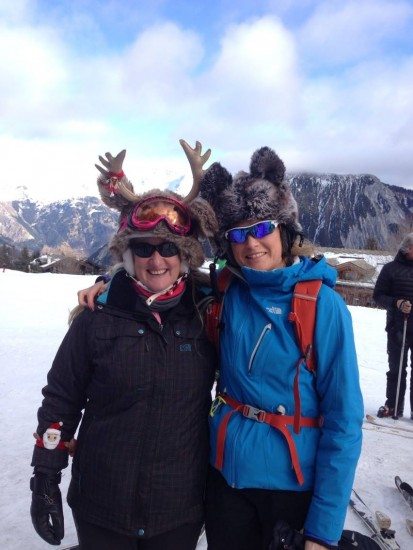 Try not to moan: Moaning won’t change the weather forecast and it simply makes everyone else feel down, too.

Remember, too, that your chalet hosts/reps really want the snow to arrive, just like you do, so there is no point becoming annoyed at them about the lack of snow. A holiday is a chance to relax, eat well, drink and chat, as well as ski.

Take walking boots: The Alps boast a fantastic network of walking and mountain biking trails. In winter these are usually utilised for cross-country skiing but our Xmas week of less snow meant the trails were open to walkers.

We enjoyed a wonderful 16-mile out and back walk with lots of ascent and decent from La Tania, via St Bon Tarentaise and Bozel to Champagny. It felt like summer in the Alps and we walked along in t-shirts and lightweight leggings.

The views were incredible and if there had been more snow I would never have discovered this impressive network of trails. I might well return in the summer for further investigation.

Try other sports: There’s mountain biking, snowshoeing, tour skiing, tobogganing, parapenting, hot air ballooning and walking to be enjoyed, as well as downhill skiing. When there’s less snow this is the perfect opportunity to try a new sport.

Be prepared: When the snow comes it may well suddenly come! On our last day there was a massive snow dump and we had thankfully planned ahead by booking a late flight out of Geneva.

We got up early, bought an extra day’s pass (plus Carte neige cover) and made sure we were two of the first on the powder snow slopes. We had a total blast and finished the ski holiday on a big high.

Book another ski holiday: In more than a decade of skiing I have mostly enjoyed brilliant snow conditions. I trust this will happen again and we have already booked another ski trip, this time to Utah!

I think I might also book a cheeky weekend to La Tania, in the Alps, as soon as I hear of another favourable dump of snow.