The snow fell all around me wherever I went this weekend. On an attempt of Carn Mor Dearg the snow was so deep that I fell up to my neck into the white, fluffy stuff. Then on a walk on Loch Lomondside, so much snow fell in less than one hour that my friend and I feared we might not be able to drive home.

A call out on Munroaming for a pal to walk Carn Mor Dearg (pronounced “jerarg”… See What I Now Know About Gaelic Place Names) resulted in an early morning meeting with The Munro Blagger at the car park at the end of Glen Nevis Road.

I was in Fort William to attend some of the Fort William Mountain Festival and decided to make use of the Saturday to tick off CMD. The Munro Blagger planned to get almost to the top of CMD!

The forecast had not been for snow but Scottish weather is fickle and when I awoke on Saturday to a dusting of snow in the town I realised that the walk might not be as straightforward as we had hoped.

By the time I reached the road end car park it was clear there had been a lot of snow overnight at this higher level.

But The Blagger and I decided that we would start the walk and see what happened. We knew there was a high chance that we would not make it to even near the summit but why waste a day in Scotland’s great outdoors?

I have walked the trail into the Nevis Gorge several times before and it always stuns me with its beauty. This is a popular walk to see Steall Falls and for Munro baggers it’s the route to a number of Munros including Aonach Beag and the Ring of Steall.

With a blanket of snow the gorge was far, far prettier than I have ever seen it.

The weather was incredibly changeable, from sun and blue sky, to overcast, to light snow, to heavy snow, to blue sky again.

When the sun shone The Blagger and I felt our spirits lift and our hopes of reaching the summit improve. When the snow – and wind – came along we wondered if we were mad to be out in such conditions.

And as we began the climb towards the bealach that would lead to the CMD ridge and summit we discovered that the snow was far deeper than we had predicted. The higher we went the deeper the snow became and the slower our resulting pace. 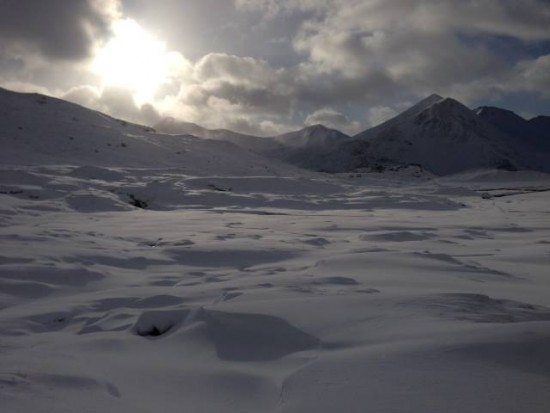 But, still, we enjoyed ourselves. This was my first meeting with The Blagger and we swapped stories about walking, life, work and stuff. At regular intervals we exclaimed out loud at the beauty of the snowy mountains and we congratulated ourselves on how lucky we were to be surrounded by such a landscape.

After a couple of hours we found we were slogging through knee-deep snow. On a few occasions we each fell forwards into deep snow or found a leg disappeared into a snow-covered burn.

The Munro Blagger aka Bobby Motherwell.

Then The Blagger suddenly fell waist deep into deep snow. I stopped to make sure he was not hurt and asked if he’d mind if I took a photo. We were both laughing at the sudden depth of the snow.

I step forward and started to turn round to take a photo when I then fell headfirst into a deep and snowy soft hole. I was a little shocked but quickly recovered and pushed my head up to just about the snow level.

It was The Blagger’s turn to ask if he could take a photo of my predicament – before he then helped me to climb out of the snow hole.

At this point, even though the snow had stopped for a while, we decided that it might be better to return to the cars. It looked likely that the full hike would take far more time than we had planned and we were both becoming tired with walking through such deep snow.

It was a joint decision and one that we ended up agreeing was the right thing to do. During the walk back the snow became heavier and the wind picked up. It would have been a long and tough day if we had chosen to push on for the summit (or almost summit!).

You’ll see from the photos that we still had a great and memorable day out in the Highlands mountains. And we have a plan to return to walk both the Ring of Steall and CMD when the weather warms up a bit.

My walking friend Leslar and I had planned a Sunday walk. We would make the most of time created in between dropping and picking up Little Miss Outdoors at a volunteer stable hand job near Balloch.

We had in mind the Glen Striddle Horseshoe walk from Luss, near Balloch. However, it was clear from the start of the day that snow on the hills would force us to walk at a lower level.

From Luss and Balloch there are a few other options, including the John Muir Way and the West Loch Lomond Cycle Path. We chose the WLLCP because we were already at Luss.

But we could not have envisaged how quickly the snow would come down. In less than an hour the snow was inches deep on the ground and we could see that the cars on the A82 were travelling slowly through snow covered roads.

The snow did provide a pretty picture along the lochside though. The big, fluffy flakes quickly covered the stark, leave-less trees and while the views over the grey loch were limited the falling snow was stunning.

But we worried that the road would become treacherous and so we turned around and walked quickly back to our cars. At first the journey home was, indeed, snow hampered. Several cars had become stranded on the roadside and I stopped to help other drivers to try to rescue a car.

I drove slowly and carefully and became anxious about the full drive home. Then, as quickly as the snow had appeared, it disappeared, Just a five miles south of Luss the snow thinned and by the time I reached Balloch it was hilariously non-existent.

With a full hour left before I needed to pick up Little Miss Outdoors I decided to swap walking boots for running shoes and enjoyed a chilly and wet but uplifting run back along the WLLCP, but this time from a mostly snow-free Balloch.

Even after three decade of living with changeable Scottish weather I am still occasionally shocked by just how fickle it can be.

Was your weekend snowy or non-snowy?