What I now know about Gaelic place names 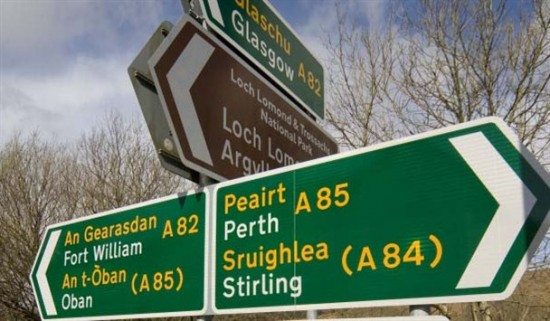 Do you know your Beinn from your Bidean, or the difference between Sgorr and Sgurr. And could you identify a Torr, Tom or Tulach? The chances are you have seen all of these words on maps and in the names of places, hills and mountains across Scotland.

Even if you do know the meanings and derivations of most of the words, including others such as Aonach, Bealach, Maol, Meall and Poll, do you know how to pronounce them?

At last week’s Fort William Mountain Festival event, Understanding our Mountains through the Gaelic (that’s Gaelic with a hard “a”) Language, we learned all this – and a lot more.

Led by Hebrides-born Cailean Maclean, whose first language is Gaelic, the workshop at Sabhal Mor Ostaig, West Highland College UHI, in Fort William, took participants through a brief history of the development of the ancient Scots language.

Cailean explained some of the basics of the Gaelic language and offered an overview of some meanings and pronunciations of place, hill and mountain names, especially those connected to the surrounding Lochaber area.

Here are 23 things I learned about Gaelic and mountains

I had been keen to attend the workshop simply because I struggle to properly pronounce many Munro names. I found myself fascinated by the history of the Gaelic language and the development of place names in Scotland.

I suddenly had an urge to learn the Gaelic language, although in reality I do not have the time. I would, however, be interested in learning more and the West Highland College UHI offers a range of Gaelic courses, including evening sessions and distance learning.

This year, the college also plans to run courses that combine hill walks in the area with lessons in Gaelic. Keep an eye on Sabhal Mor Ostaig for details.

Another reason for attending the workshop was to learn the proper way to say Ben Chonzie. This is a Munro in Perthshire. Some people say “Honzie” and others say “bennee hone”. I have also heard “benneconie”. I am writing these phonetically but do listen at WalkHighlands for two of the versions.

I was mystified. Cailean wasn’t sure because Chonzie is not a Gaelic word, although it seems that the mountain name has come from Gaelic origins. He has promised to investigate for me.

Find out more about Cailean Maclean at Skye Media (as well as being a Gaelic place names expert he also appears to be a superb photographer).