I was reminded at the weekend how changeable  – and difficult to predict – Scotland’s weather can be. While the forecast (MWIS) had warned of wind, rain and low clouds the the G-Force and I arrived at Ben Lawers to walk Meall a’Choire Leith and Meall Corranaich the conditions seemed amazingly good.

The start point of these two Munros at the western end of the Ben Lawers range is high – at almost 550m – yet even at this height the wind was not strong and the clouds were much higher than us. It was raining, but not heavily.

We headed off to walk to the first Munro, Meall a’Choire Leith, following a wet trail at first and then over rough and rugged terrain. A fast flowing river crossing was made far easier by a hydro electric dam that turned the gushing waterflow into a mere trickle and we also found short sections of trail further on.

But for most of the walk towards the steep south-western side of Meall a’Choire Leith, we tramped over peaty bogs, grassy tussocks and wet ground. Yet still the weather felt fairly mild.

The hike up the side of Meall a’Choire Leith was hard going. Every so often I stopped to shake the lactic acid from my calves and thighs and to admire the views. The day was far from the sunny beauty of Munro bagging the weekend before but the landscape looked looked stunning in all its dramatic moodiness.

As we approach the summit the wind pushed us along from behind and I held out my arms for extra wind power. I guess this should have been an indicator for what was to come for the rest of the hike.

After a brief rest on the top of the Munro (my 176th in my first round and the final Munro on the Ben Lawers range) we headed off to make the summit of Meall Corranaich. This is when the true weather of the day hit us. The wind buffeted us for the side and then face on. The rain came on much harder and the clouds came down.

Although I have experienced stronger winds I have never felt so exposed to the power of the wind. It pushed and pulled and knocked us around as we descended to a bealach and then made our way south and around crags to the east and onwards to the top of Meall Corranaich.

Snowfields made walking tricky, too, and at times I wondered if I was going to be able to take another step forward. Even the G-Force, who is heavier and stronger than me, found the wind hard to deal with. 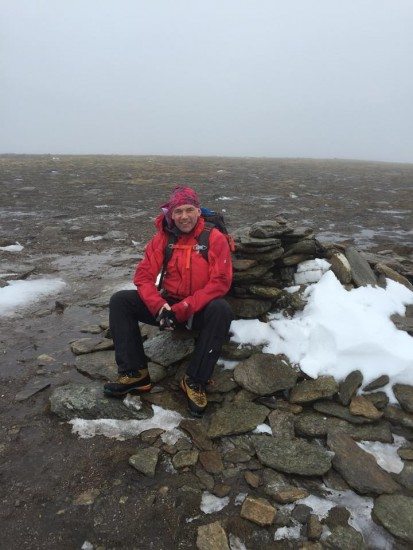 As the wind grew and the temperatures dropped we both needed to add more layers and thicker gloves. Stopping for even a few minutes to take kit out of our rucksacks felt like very challenging.

I think that if I could have changed the plan I would have left  the summit of the first Munro and headed straight back to the car. After all I had walked Meall Corranaich twice before, once during a training outing and another time when taking part in the Artemis Great Kindrochit Quadrathlon last summer.

However, by the time I was thinking about this we were ascending again to reach the second Munro. The summit seemed too close to avoid and the way back meant a much longer walk.

On a calm day these would not be tricky Munros, but in the disagreeable conditions that we faced they were hard fought. A white-out made navigation much trickier and we wondered if me might have missed the route to the summit of the second Munro.

But eventually, having checked our bearing a few times to be sure, we saw a cairn and felt stunned that it had been so difficult to walk this second Munro.

The battle with the wind wasn’t over, however, and the first section of the descent was the most challenging part of the entire hike. On several occasions the wind pushed me to the ground and I had to fight to get up again.

The G-Force battled to put on ski goggles due to driving rain (I managed with my normal specs) and I could hardly feel my hands and feet because they were so cold.

We tried to link arms for some of the walk but the wind sent us spinning in different directions so we were left to cope alone. We did make sure that we were both close by at all times, though.

I am not sure at what point the wind finally receded enough for us to start chatting again. It must have happened gradually because the chat came back gradually, too. Eventually we were also able to unzip our jackets a little and remove tightly fastened hoods.

We both seemed a little shocked by how the conditions had changed but we also felt elated. I don’t think either of us felt in huge danger at any point because we both have enough experience to know what we can handle in the mountains. Yet we were not blasé either. We knew we needed to keep going to stay warm and to make it to relative safety.

We had stopped to take map and compass readings many times and we were very cautious close to craggy sections and snowy overhangs.

There is a great sense of achievement from battling through tough conditions to reach a mountain summit – and the the relief of returning safely to the start of the walk.

I imagine that if I was to return on a clear summer’s day these two Munros would feel like a stroll in the park. On Saturday they proved to be remarkably challenging.

It is always worth remembering that Scotland can throw a whole lot more weather at you than you ever imagine possible.