It is always good to hear from local people when looking for the best places to enjoy outdoor activities. Travel search website GoEuro asked for surfers in England to suggest their favourite places to catch the waves. Here are six of the best.

It would be great to hear from the surfers in Scotland to find out where they most like to surf – and why.

This spot can work on almost all stages of the tide and people surf there all year round. It’s the first place that I got into winter surfing and never looked back. Fistral can handle swell sizes from knee high to double overhead. There are a lot of right hand waves, but a few lefts tend to open up too.

It’s a great spot for beginners and advanced as surf lessons are available. Fistral beach hosts many of the major UK surf competitions between spring and autumn, including the Boardmasters festival where surf, BMX and skate competitions are held by the beach. There is literally something for everyone.

The beach where I grew up beside and where I first stood up on a wave, is still one of my favourite spots in the world. With three miles of golden sands and the iconic Godrevy Lighthouse looking over the North end of the stretch, Godrevy beach is an idyllic scene in itself.

The north end of the bay picks up the most swell and the further you head south down the beach, the wave size begins to drop making it perfect for beginners and intermediates alike. With a variety of peaks along the beach you can often paddle out and find a spot to yourself.

Long rides and open faces offer up lots opportunities for cutbacks and turns. Now I’m travelling the world shooting pictures and surf coaching most of the year there is still nothing that compares to coming home and paddling out at Godrevy on a pumping day with my friends and scoring fun waves.

This is the beach I’ve surfed more than any other. If you’re lucky enough to visit when it’s 3ft and clean, you could get one of the longest waves of your life. A favourite with longboarders, the slow, rolling waves are also perfect for beginners, and the beach is long enough that you can normally find a spot to yourself. Afterwards, I like to stop off in Braunton for a healthy brunch at the Wild Thyme cafe. 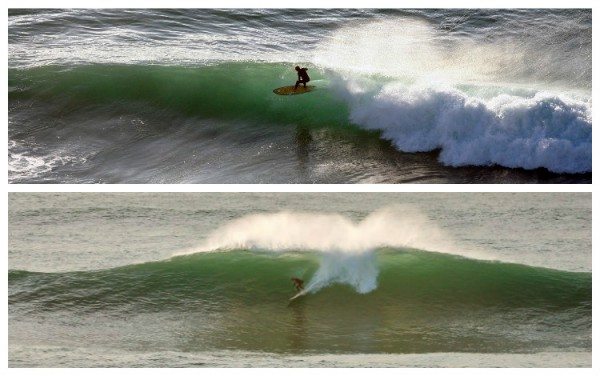 Barely two miles outside of Newquay lies the vast beach of Watergate Bay. Facing west, and backed by huge cliffs with peregrine falcons soaring high above, this is an atmospheric beach with a real ‘open ocean’ feel to it. It catches just about any swell going.

As the tide drops out, Watergate opens up to a two-mile stretch of golden sand with various peaks along it; even in summer it’s quite easy to find a spot to yourself. The waves are better around mid-tide with a mix of cruisy walls right out the front and barrel potential further to the north though these waves can be hotly contested.

Watergate has some of the finest facilities of any beach in the UK thanks to the Watergate Bay Hotel complex. Four restaurants, a take-away, boutique surf shop and a highly-spec’d surf school make for a very comfortable visit regardless of your intentions or the weather.

I grew up in swell-free Bristol, so naturally on passing my driving test (many moons ago now) every spare moment was spent at this tidy little spot in South Wales. This beach, although not a purveyor of the UK’s best wave, is quite pretty in its own little way. Situated just 11 mins off of the M4, this place presents itself as being fairly easy to get to, having the occasional decent break and is often bustling with really friendly locals. It is therefore, perfect for beginners like myself in my teens.

If you are just starting out be aware of the rocks to the left hand side of the beach that become covered by a rising tide. Also, on big springs, the beach may disappear completely, leaving you with just rocks to land on – always check the reports before jumping in.

Top tip: Perfect for the post-session blood sugar low try a “warm cookie” from Malc’s Café in the car park.

Sam, Over the Dune

The best waves at Woolacombe beach are at the northern end, by the rocks. You can spot the locals as the ones who appear from a hidden set of stone stairs in the cliff and jump straight off the rocks into the line-up. The next best bet is at the southern end, but there are peaks up and down the entire beach in 2-4ft swells.

More than that, for me, Woolacombe was a stepping stone. As a learner surfer the beach break was the perfect place for progression. You can try to beat the white water and get out to the line-up, but even if it goes wrong (and it will!) you can turn around and ride it in, working on your pop and stance. By the time you’ve worked up the fitness and upper body strength to get out, you’ll be in a much better place to deal with “green” set waves.

The beach is a cracker. With at least two miles of sand, there’s plenty of room even on busy days. The town, perched on the side of a hillside, is all-time Devonshire. Between pasty shops, greasy spoon cafés and the pitch ‘n putt on the front you’ll find surf shops, plenty of places to hire gear and The Red Barn – a big pub with a timeline of surfboards up in its high ceilings – overlooking the water.

And what about the top Scottish surfing locations? Any suggestions?