Have you tried: Trig bagging?

April 18, 2016, is the 80th anniversary of the trig. This was the date when a huge Retriangualtion of Great Britain programme started, which involved the installation of more than 7000 trig pillars in the country. These trigs formed the bases for measuring the shape of the landscape and led to the OS maps that we use today.

There are still thousands of trig pillars remaining in Britain and many offer a beacon to hill and mountain walkers. In celebration of this trig point anniversary I wrote a column for the Sunday Mail encouraging more people to go trig bagging. Read the article.. 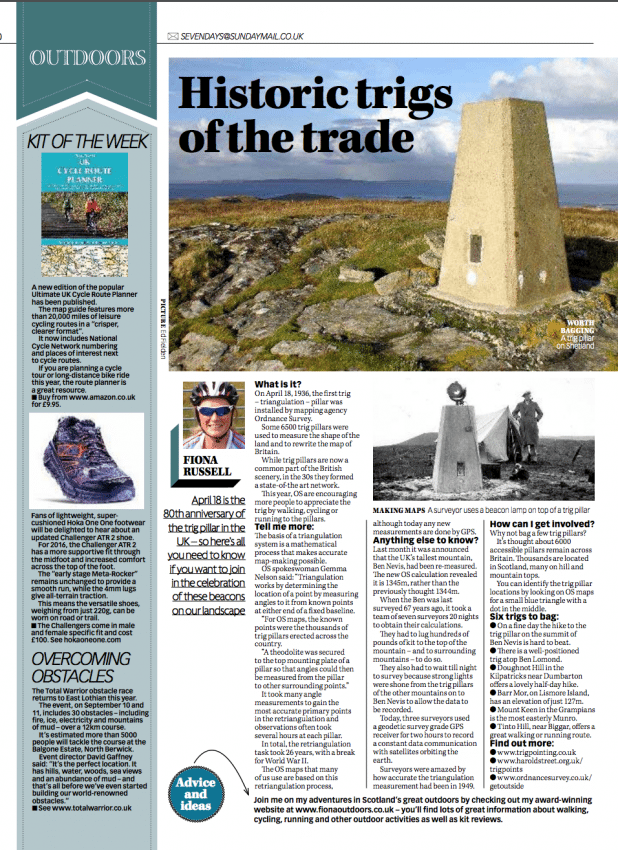 In celebration of the trig pillar

On this day in 1936, the first trig – triangulation – pillar was installed by mapping agency Ordnance Survey (OS) and launched the “Retriangulation of Great Britain”.

Some 6500 trig pillars were used to measure the shape of the land and to rewrite the map of Britain.

While trig pillars are now a common part of the British scenery, in the 1930s they formed a state-of-the art network.

This year, OS are encouraging more people to appreciate the trig by walking, cycling or running to the pillars.

Tell me more: The basis of a triangulation system is a mathematical process that makes accurate map-making possible.

Gemma Nelson, a spokesperson for OS, said: “Triangulation works by determining the location of a point by measuring angles to it from known points at either end of a fixed baseline.

“For OS maps, the known points were the thousands of trig pillars erected across the country.

“A theodolite was secured to the top mounting plate of a pillar so that angles could then be measured from the pillar to other surrounding points.”

It took many angle measurements to gain the most accurate primary points in the retriangulation and observations often took several hours at each pillar.

In total, the retriangulation task took 26 years, with a break for World War II.

The OS maps that many of us use are based on this Retriangulation process, although today any new measurements are done by GPS.

Anything else to know?: Last month, it was announced that the UK’s tallest mountain, Ben Nevis, had been re-measured.

The new OS calculation revealed that the Ben is 1345m, rather than the previous 1344m.

The change, which will be displayed on all new OS digital and paper maps, is not due to geological movement but thanks to improvements in measuring technology.

When the Ben was last surveyed, 67 years ago, it took a team of seven surveyors 20 nights to obtain their calculations.

They had to lug hundreds of pounds of kit to the top of the mountain, and to surrounding mountains, to do so.

They also had to wait till night to survey because strong lights were shone from the trig pillars of the other mountains on to Ben Nevis to allow the data to be recorded.

Surveyors said they were amazed by how accurate the triangulation measurement had been in 1949.

How can I get involved?: In this 80th anniversary year, why not bag a few trig pillars?

There are thought to around 6000 remaining pillars spread across Britain that can be accessed.

Thousands of trigs are located in Scotland with the higher pillars on hill and mountain tops.

You can identify the trig pillar locations by looking on OS maps for a small blue triangle with a dot in the middle. 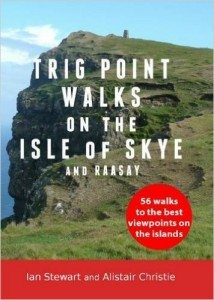 Also see the book: Trig Point Walks on the Isle of Skye and Raasay by Ian Stewart and Alistair Christie.