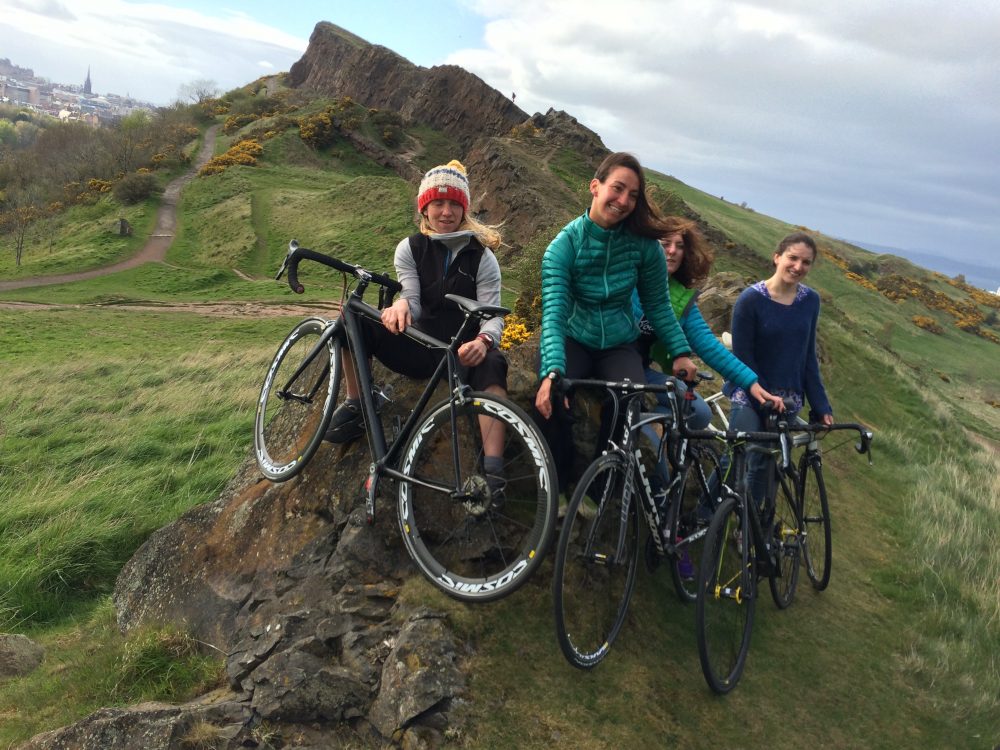 Some of the record bid riders. Pic credit: Rebecca McQuillan.

An attempt to set a new speed record for the challenging 500-mile North Coast 500 road route in Scotland takes place this weekend. Seven women will take part in the non-stop ride with the aim of beating the 37 hours 58 minutes set by Scottish adventurer Mark Beaumont in 2015.

The female record bid will also mark the launch of a cycling organisation, the Adventure Syndicate, which hopes to “inspire, encourage and enable” women to reach their goals.

The event and syndicate are the brainchild of former Scottish and UK mountain bike champion, Lee Craigie.

At 6am on May 14, Lee will be joined by six other leading riders, Emily Chappell, Ricki Cotter, Anne Ewing, Gaby Leveridge, Zara Mair and Jo Thom. They will set off from Inverness Castle to ride a non-stop NC500.

The route heads around the top of Scotland along the coast of Easter Ross, Caithness, Sutherland and through Wester Ross.

They face little, or no, sleep and fickle Scottish weather as they ride the challenging route with a total ascent of at least 10,000m, some 1,200m more than the height of Everest.

When Mark rode the route – believed to be between 516 and 527 miles on the road – it was the furthest he had ridden in one non-stop outing. He said at the time: “My previous PB was 270 miles. The NC500 was hard and exhausting.”

Now Lee is keen for a woman to hold the NC500 speed record. She said: “Seven of us will ride the route together – with four riding the full distance – and we hope to be able to help at least one person to ride it in just 36 hours.

“We are also aiming to have everyone still speaking to each other by the end!”

The team will be followed by at least two support vehicles and a film crew.

The new syndicate will promote women’s cycling in a fresh way. Lee explains: “We recognise that not all women share the same motivations for being involved in sport. We feel it is time to present women in cycling in a different light.

“Between us, at the core of the syndicate, we are champions, record-holders, award-winners, athletes, adventurers and explorers. We are also speakers, authors, teachers and learners. We are passionate about sharing our adventures with other people and inspiring them to set out on their own.

“But inspiration is only the first step. What sets the Adventure Syndicate apart is our commitment to encourage and enable women – and everyone else – to identify their ambitions, overcome the obstacles that stand in their way, and make the most of their talent and potential.”

The syndicate plan to provide inspiration through their website and they will also offer a programme of talks, workshops and guided rides.

You can support the NC500

The all-female team are keen supporters to turn out to ride with them or to cheer them on for the roadside this weekend.

Lee says: “We encourage everyone, but particularly women and girls, to join us for sections of the ride. We want to be inspiring and inclusive and we need your help to do this.”

There will be live online updates of the record attempt on the Adventure Syndicate website.