I wasn’t sure what to expect from a morning of caving. I have never tried this activity before but a trip to Northern Ireland this weekend offered the chance to give it a try. I imagined that caving might be quite wet and weird, but I also thought I would enjoy seeing a very different natural world under the ground.

As it turned out, the caving trip to White Father’s Cave in the Marble Arch Caves Global Geopark was all of the above – and a great deal more. 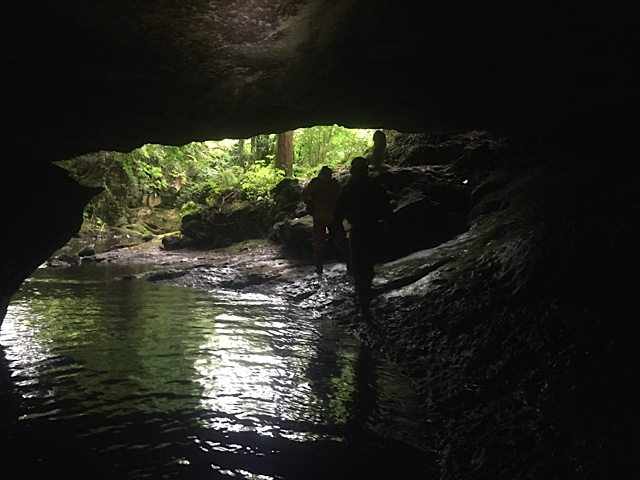 It’s the exploration of a natural underworld of rivers, waterfalls, winding passages and lofty chambers. There are two options: Dry and wet caving.

Dry caving is simply drier so you are less likely to swim in the rivers or wade in deep water, while wet caving involves more wading and swimming in the underground water.

An instructor leads the caving trips and caves are chosen according to the weather (too much rain and some caves become too flooded) and the fitness and confidence of participants (if you are fit and confident about swimming in cold water you can enjoy a more adventurous caving trip but there are caves and trips to suit all.)

Looking scared? Or mildly amused, as we dress up for caving.

What do you wear?: At Corralea Activity Centre, near Belcoo, in County Fermanagh, Northern Ireland, you are kitted out with a wetsuit, neoprene gloves, Wellington boots, a thick and durable boiler-suit type oversuit, buoyancy aid, helmet and light. Activity centre owner Marius also gave us belts to tie around the waist of the oversuits “to stop them dragging you down in the water,” he said. This worried me a bit!

Where to find caving?: Limestone caves are great for caving and can be found worldwide.  Yet, I had no idea until I travelled to Northern Ireland that there are globally acclaimed caves to be found.

In Marble Arch Caves Global Geopark there are some 200 caves and the park is recognised as one of 120 UNESCO sites worldwide. It is the second of only two UNESCO designated sites in Northern Ireland.

The status is awarded in recognition of an area’s internationally important rocks and landscapes and how they are used for sustainable tourism.

While it’s possible to visit the showcase-style Marble Arch Cave in the geopark (this is definitely worth doing), the other more up-close-and-active way to view some of the other caves is by “caving”.

The G-Force gazing up at the roof of the cave wiht its many formations.

After heavy rain – and more forecast – Marius chose White Father’s Cave for our exploratory trip. It was, in fact, the first cave he explored as a teenager and one that he holds in high regard. He said: “I never tire of visiting this cave because there are always new things to see. There is always something you discover because your light shines on something new or you suddenly see a formation in a different way.”

White Father’s Cave is actually located in the Republic of Ireland. The Marble Arch Caves Global Geopark straddles the border between Northern Ireland and the Republic of Ireland. It’s difficult to know when you have crossed the border in this part of the country (unless you live there) and without even realising it we travelling into Ireland from Northern Ireland to reach the cave.

At first it takes a bit of getting used to. Marius led us into the entrance of the cave and although we had bright headlamps, the light shone in an arc rather than all around us.

We kept to rocks at the side of a river flowing through the centre of the cave. To begin with I cold see only dark rocks and a black river below. But as my eyes adjusted I began to see an impressive range of  geological formations.

When Marius stepped into the water, he indicated that I should follow. I worried that the river level was so high it would send water inside my boots. And, of course, it did.

I must have looked quite shocked because Marius said: “The Wellington boots are not meant to keep out the water. Rather, the rubber offers good protection for your feet and ankles from rocks etc in the cave. You will get used to walking with your boots full of water.”

My feet and lower legs felt very heavy and I moved clumsily across more rocks and through a river that was flowing fairly fast in our direction. However, I found that limestone is surprisingly grippy in welly boots and as my eyes and balance adjusted I started to enjoy the activity.

Marius also requested that we did not touch the cave walls where we could see obvious “formations”, whether coating the walls of the cave or in the formation of stalactites.

The formations are created when water flows down through the ground and into a limestone cave. The water dissolves a mineral called calcite and carries it through cracks in the ceiling. The dripping water leaves behind traces of calcite, which slowly (very, very slowly… like 1mm per 100 years) builds up on the ceiling until a stalactite takes shape, hanging down like an icicle.

As you will know, the difference between a stalactite and stalagmite is that a stalactite hangs “tite” to the ceiling and the stalagmite, “mite” grow up to meet the Stalactite.

We were stunned by how many thousands of stalactites, in many different sizes, we could see in this one cave.

We also saw thin straws of calcite formations and vast areas of the walls where calcite had formed and looked like sponge, except it’s very hard. The array of different shapes, including the thick concertina folds of curtains, large stalactites, long straws and vast flows that looked a bit like rounded lava fields, were stunning, especially when you think how long these have taken to grow.

As we walked and waded Marius pointed out all kinds of geological wonders. While I had feared I would be cold and frightened in the cave I found I was distracted by all that I could see and what Marius was telling us. It was all rather amazing!

Moving through the cave

We actually explored two caves, side by side. As we progressed into the larger second cave the water became deeper and faster flowing. At times we were up to our chest in water and for around 20 to 30 metres we had to swim.

It felt totally surreal to be swimming through an underground cave but it was also exciting. The water was cold but not as cold as a Scottish loch at the start of the summer and we were dressed for warmth.

Marius suggested it would be a good idea not to swim too vigorously with our legs in case out welly boots fell off!

At one point we stopped to sit on a large and smooth rocky area. Marius told us to switch off our headlamps and to be silent for a minute. He then asked us what we could see. Absolutely nothing! The cave was so very dark and the only sound was the rushing and swirling of the river beside us. It was eerie but not scary.

The cave had a surreal atmosphere. The name White Father comes from the nearby former monastery (now a prison). In past times the monks – presumably with white beards, hence the name White Father – would come to meditate in the peace and quiet of the cave.

The choice was to walk back over fields above the cave or to return the way we had come. We felt a lot more confident and steady on our feet so we opted to return underground. I think by this time we cared less about getting wet or falling over and so we moved faster.

It was quite tiring though because the river flow was against us and we had to swim, wade and push through the current.

We pointed and oohed and ahhed some more. I think I giggled quite a lot because it still felt so weird to be wading and swimming underground in the dark.

Before I went caving I thought it was a bit of an odd activity but I can see now why Marius became hooked when he first saw the cave as a youngster. He said: “I have explored many caves and even discovered new chambers but I always enjoy returning to this cave.

“It’s special for me because it was the first one that I went into. Back then we didn’t have any specialist equipment and it was cold. Decades later, I still really enjoy showing people the natural features of this underground world. It’s such a great place to explore and see.”

I had been afraid that caving would be focused on crawling about in tight places with low oxygen. I believe there are places where you can try this if you want. This trip was in a fairly large and open cave. We did a bit of wriggling through one short section but only so we could experience how it felt. I don’t think I liked it very much.

I did fear that bats would fly into my face and I’d see too many spiders but this didn’t materialise. Mostly, my fears were unwarranted and I really enjoyed the experience, although it was a bit strange!

I would recommend giving caving a go.

I travelled with P&O Ferries: From Scotland to Northern Ireland on the Cairnryan to Larne ferry. The G-Force and I enjoyed the hospitality of the Club Lounge. We took our car and then drove from Larne to our accommodation Finn Lough Resort. We stayed for two nights  in a beautiful apartment and enjoyed a Full Irish breakfast each morning in the dining room/restaurant.

This blog is in collaboration with P&O Ferries.