I put the Powermonkey Explorer 2 portable gadget charger to the test.

I use a lot of gadgets when travelling or spending time in the outdoors, including my mobile phone, sports watch, GoPro, Garmin bike navigator and camera. They are really handy but they do tend to run out of charge, especially my mobile phone.

So I usually carry a portable power charger with me. I need the charger to be small enough to fit easily in a backpack and light enough to be easily transportable. I also want it to be durable and waterproof.

The Powermonkey Explorer 2 ticks all these boxes. I know it doesn’t really matter but the charger also looks quite funky.

The mobile charger is small enough to fit in the palm of a hand and weighs 286g. The casing feels strong, durable and it’s waterproof. 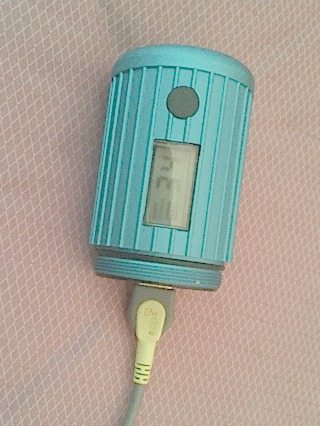 In use while camping.

To start with I was flummoxed by how I would get the iPhone 6 to charge. The leads look more android friendly than iPhone. However, I worked out that I could use my own charger lead and connect to the USB output. It’s possible to buy a specific adaptor lead to match the Powermonkey with an iPhone if you wish.

I stalled bit when trying to get the charger to charge my phone even once connected. You need to press down the small black button on the side to get it going. After that I left it to its own devices and it charged my phone over night.

The Powermonkey unit houses a dual-core (whatever that means?!) 6000mAh lithium-ion battery. It claims to be capable of recharging an iPhone 5 up to three times, a GoPro Hero3+ four times and a Garmin Edge 1000 four times.

In use, I found a full charge up of the Powermonkey did indeed recharge my iPhone 6 three times.

It is also compatible with many other 5V devices such as tablets (including iPad), iPods, digital cameras, sat phones and more.

I carried it with me on an adventure race weekend and though all kinds of weather and knocks, shakes and falls. It still looks as good as new.

To use the charger you must first charge it up via an electricity point. If you will not be near electricity you might like to look at the Solarmonkey Adventure.

Powermonkey Explorer 2 is £79 from Powertraveller