Scottish adventurer Elaine Hopley, 45, rowed into the record books today when she set the solo female record for the Talisker Whisky Atlantic Challenge. She finished the race, which is known as the world’s toughest row, in 59 days, 19 hours and 14 minutes.

Elaine, of Dunblane, arrived in English Harbour, Antigua, in the early hours of Sunday morning, greeted by her family and friends.

She said: “It was totally epic and unlike anything I could have ever imagined.

“There were some terrifying times, such as when I was almost hit by lightning bolts during thunder storms, and I really missed my family especially as I was away over Christmas and New Year.”

Elaine also battled other tough conditions such as rowing through blood rain from the Sahara. She was also stung by a jellyfish and visited by a shark.

She endured sleep deprivation, sweltering heat and the psychological stresses of living and working in such an unpredictable environment.

Elaine was rowing in memory of her mother, who she cared for following the onset of Alzheimers. She has been raising money for Alzheimers Scotland and rowed a boat named after her mother, Jan.

The rower burned around 8,000 calories a day and lost 20% of her body weight over the duration of the race, which started on December 14, 2016, from La Gomera in the Canary Islands.

Sarah Fleming, Talisker Brand Manager, said: “We are delighted for Elaine and her record row. To us, the Talisker Whisky Atlantic Challenge is a perfect opportunity to support a remarkable adventure that at the same time benefits so many worthy charities.” 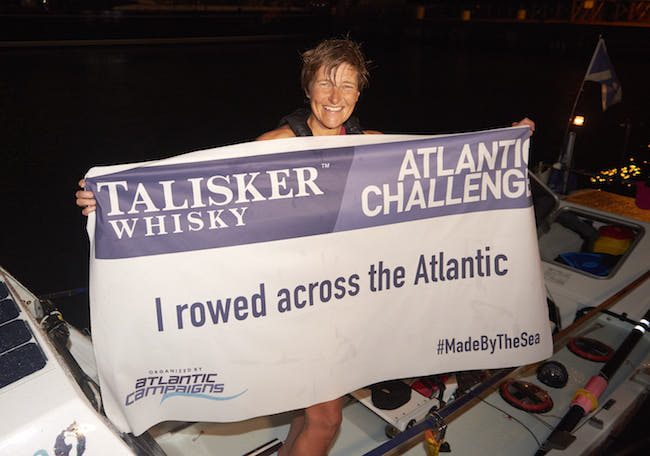