Geoff Allan’s first walk to a bothy was in 1988. He had come to Edinburgh to study at university and that new year he headed to the EUMC club hut in Glenlicht, near Shiel Bridge in Kintail, to bring in the bells with friends. He never looked back.

The following year he became secretary of the Mountain Bothies Association and, this year, after many years of cycling to, photographing and documenting more than 100 bothies across Scotland, he published The Scottish Bothy Bible.

Geoff, who still lives in Edinburgh, says: “From my very first bothy trip I was hooked. I liked the basic facilities – for free – of the bothies and the chance to get away from it all. I spent many enjoyable years seeking out and cycling to bothies as a hobby.

“Then, in 2009, when the MBA first launched an on-line guide to the location of the bothies, it occurred to me that there should be a guide book. Prior to this time, you needed to be member of the MBA to gain information about the whereabouts of the bothies or figure it out by word of mouth.

“But with the information officially in the public domain I realised there was a gap in the market for a detailed guide.”

A creative artist to trade, Geoff wanted to visit and photograph every one of more than 100 bothies listed in his book, which is published by WildThings Publishing priced £16.99.

He says: “Even the task of visiting all the bothies takes time. Most are remote and I started off by visiting them by public transport and on my bike. I didn’t have a car.

“I was working full-time and trying to reach all the bothies and in addition I wanted to visit them in good weather so the photographs would as good as possible. This can be tricky in Scotland!

“Then I had to write the book, adding in a lot of detail and information so that people can find the bothies and also know what to expect when they arrive. My aim is to encourage a wider range of people to visit the bothies.”

For the final 18 months of the book project, Geoff devoted all his time to writing and further research. And the result is a beautiful and highly detailed book that offers both a comprehensive guide to 104 bothies and a coffee table attraction.

Geoff has been delighted and rather taken aback by the instant popularity of his guidebook.

He said: “I knew that people might like a book about the bothies but I had no idea it would be so popular. The first edition, a run of 7,500 has sold out very quickly. We are now publishing a 2nd edition of another 20,000 and it looks like these will sell fast as well.

“To say I am very pleased is an understatement. It has been such a lot of work and I have had to dedicate myself full-time to the book so it was a bit worrying financially but now I see the book in print and how many have already sold I can relax a little. It is an exciting time for me just now.”

The secret of the bothies

Some people might be worried that a book such as the Scottish Bothy Bible will spoil the exclusive nature of the basic bothies.

It was in the 1930s that bothying as a recreation first began in the UK when people, especially men, from the towns and cities started to go walking and climbing in the countryside.

They came upon a number of partly derelict cottages on large estates and these became a place to meet and sleep overnight for free. This leisure pursuit grew after World War II and bothies became even more popular.

However, by the 1960s, many of the shelters were falling further into disrepair due to lack of maintenance. Brilliantly, an English cyclist Bernhard Heath stuck upon an idea of how to maintain and develop the bothies and this led to the formation of the Mountain Bothies Association.

Many estate and land owners were happy for the shelters to be maintained and used, so long as people were respectful of the shelters, environment and surroundings

For many decades, it was thought that the secrecy surrounding the location of bothies would keep them safe from over-use or damage. However, eight years ago the MBA published details of the bothy locations on line and having sought approval to do so, Geoff started on his book. (The MBA receive a donation from every sale of the book to help fund their work.)

Geoff, like the MBA these days and other people, believes that public knowledge of the bothies is a good thing. He said: “Today there is a far more ‘open for all’ policy with the UK’s bothies. I think it’s great that more people know about the bothies and they are better educated in knowing how to spend time in a bothy in a respectful and caring manner.

“I think it’s good to also encourage a potentially wider range of people to use them. For example, I’d like to see more families making use of bothies. People do not even need to stay overnight in a bothie, they could simply hike to one and enjoy a picnic and walk back again. It’s about getting more people to explore the great outdoors and bothying is a great activity.

“Also, the more people that are aware of bothies the more chance there is they will volunteer with the MBA to help with the upkeep and also potentially donate money to the charity.

“In any case, I think that because bothies are very basic shelters, usually remote and can’t be booked, that numbers of overnighters will naturally remain relatively small.

“You have to be quite dedicated to seek one out and also carry all your own kit, food, fuel and water to the bothy so it’s not like boking a fully-equipped holiday house and driving there.”

More about The Scottish Bothy Bible

Geoff’s book is fantastically detailed and informs readers of the hows, whys, history of bothies. There is guidance about the things you will need for bothying and ideas for attractions close to the bothies, such as coastal walks, Munros and beaches.

Each bothy has details of location, how to get there, size of the bothy and the basic facilities, such whether or not (usually not!) there is a toilet.

There is information about the Bothy Code of Conduct. Although there are no formal rules for using bothies, the MBA requests that people should respect each other and the environment. 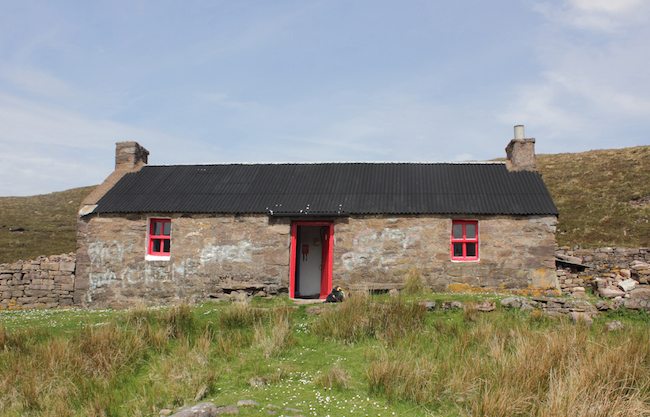 They should leave the bothy clean and tidy, just like you would want to find the bothy when you arrive. If there is no toilet, human waste must be buried out of sight. All litter must be taken from the bothy after use.

Groups of more than six people are not allowed to use a bothy or camp nearby without seeking the permission from the owner.

Anyone who stays in a bothy is asked to sign a logbook so a record is kept of visitors.

Bothying requires you to reach a bothy under your own steam, whether on foot or by bike. Because bothies are basic shelters, offering protection from the wind and rain and little else, you need to take all your own equipment and supplies.

If you plan to use a bothy for an overnight, your bothying list will include a sleeping mat and bag, food and water. You might want to take a small tent, too, because you can’t book a bothy and so you have no idea of knowing if it will be full of sleeping people or not when you arrive.

It’s recommended that you take your own fuel as well, such as coal, or collect fallen wood nearby.

Geoff thinks of bothies as his friends. When I asked him for his favourite bothies he said: “It’s like picking one friend over another. It’s such a hard thing to do but I guess I do have some that are best friends.”

Standing resolute beneath the steep slabs of The Devil’s Point in the strath of the meandering River Dee, Corrour Bothy is one of the most famous and popular of all Scotland’s open shelters.

Over the best part of a hundred years, it has been a refuge for generations of hill-walkers and climbers and is referenced in numerous articles and books. Consequently, the bothy can be busy during the summer months so it’s best to take a tent, especially at weekends.

However, in the quieter winter months, Corrour really comes into its own and if you are prepared to venture out here under a covering of snow, you’ll get a sense of the true majesty of the inner sanctum of the Cairngorms.

This part of the Cairngorm’s National Park is wonderful walking and climbing country and the round of Munros to the NW: Cairn Toul (1291m), Braeriach (1296m) and local summit Devil’s Point (1004m) is a classic adventure.

A simpler objective is a stroll to the Garbe Coire refuge below the NE ridge of Angel’s Peak (Sgòr an Lochan Uaine).

Five-mile walk in on well-defined path, which is boggy in places. There is a serious river crossing if in spate. Grid ref: NM 393 927

As you round the headland on the south side of Rùm’s wild rocky coastline, a fabulous view opens up of the craggy volcanic caps of Ainshval and Rùm Cuillin, with Dibidil bothy a tiny speck looking out across the sound to Eigg and Muck. “Its setting is breathtaking with an irresistible combination of mountains and sea,” said Geoff, who is the maintenance officer for Dibidil and goes out twice a year for an inspection..

Dibidil derives from the Norse for deep valley, and the cottage was built in 1848 to house a shepherd and his family when sheep were introduced after the Clearances, when most of the population was forced to emigrate to Nova Scotia.

It was occupied for just 40 years before the island was turned into a sporting estate. The building was rescued from ruin by the MBA in 1968 and the renovation was challenging with many of the materials brought in by boat in difficult weather conditions.

A challenging four-mile walk in on path and vague trails. Grid ref: NR566 829

Sitting unobtrusively above the tide line in one of Loch Tarbert’s numerous hidden coves, Cruib Lodge is a fabulous find and a very welcome outpost on the wild rugged stretch of coast beyond the isthmus at Tarbert, which continues right to the northern tip of Jura.

The original lodge was a summerhouse set a few hundred metres north of the bothy, forming a novelty timber folly on stilts shipped over from America. It attracted Victorian tourists, who arrived by steam yacht from the Clyde.

The bothy served as accommodation for the estate’s stalker and pony man, the stables, as well as a larder where deer carcasses and game birds were hung.

You’ll discover secret caves, raised beaches and basalt dykes along the coast, or you can follow the stream above the bothy to a fantastic wild swimming spot in a waterfall plunge pool.

See The Scottish Bothy Bible and Bothies on a Bike. (Many thanks to Geoff for the photos and for helping with the words.)