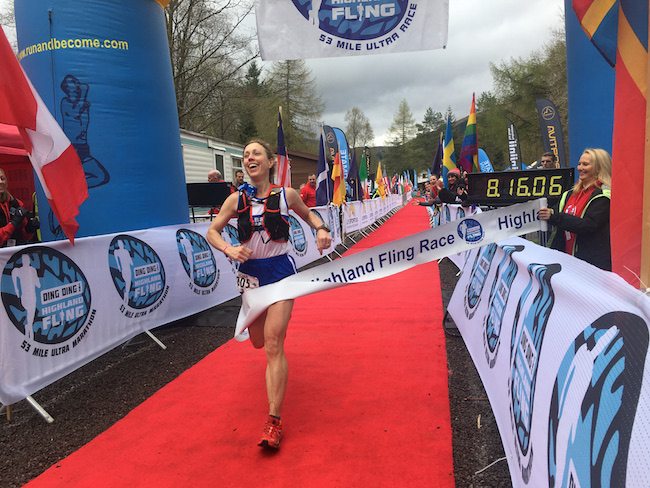 Nicola is first lady in the Highland Fling 2017.

Rob crossed the finish line of the race in Tyndrum in 6:41:15, which was 36 minutes faster than his nearest rival.

Bearsden runner Nicola Adams-Hendry, 40, who trains with local club Garscube Harriers, was the winner of the women’s 2017 race on April 29.

She finished in 8:16:07 and scored a personal best time for the race.  Nicola has completed the Highland Fling four times, and this year she was 10th overall.

After the race, Nicola said: “I wasn’t even sure I would make it to the start line this year due to a niggling Achilles injury but I did feel strong despite my worries.

“Somewhere between Inversnaid and Beinglas I realised I’d get to the end and I stopped thinking about my Achilles for the first time in months, which was great.

“I suffered with cramps after Crianlarich so I couldn’t push as hard as I wanted to the end but to be the winner in the women’s race felt like pure magic.”

Last year, the Highland Fling was host to the British Ultra Trial and both the men’s and ladies’ course records were broken by Donnie Campbell (6:54) and Beth Pascall (7:52).

Mmore than 700 runners set out from Milngavie headed for Tyndrum in the Highland Fling 2017. The route is 53 miles along the famous West Highland Way and includes a total ascent of 995m with a maximum elevation of 357m.

From the gun, Rob Sinclair made his mark. He was through Drymen in 1:22 and although this was a few minutes slower than last year’s blistering pace it ended up playing to his advantage later in the race.

By Rowardennan, Rob had a nine-minute lead in 3:10. As a relative outsider in the race preview rankings, there were few who believed he could keep up the pace.

But when Sinclair arrived at Beinglas in 5:06 looking fresh – 30 minutes up on second place – the course record was well within his sights.

Given he had no one to push him throughout the race, this was a remarkable performance.

By Beinglas, she had a 15-minute lead on second placed Morgan and she looked set for a superb personal best. Nicola hit the tape with a big smile and a look of complete shock to take a well-deserved win in 8:16:04.

Race Director John Duncan said: “It was another great day of racing and the first year we have had two Scottish champions since 2010, which highlights the global interest in the event. Congratulations to everyone who completed the event.”

Although this event is very popular with more experienced ultra runners, many of the participants were Fling first-timers, including Bearsden runner Catriona Padmanbhan.

Catriona, who is a member of Glasgow Triathlon Club, trained for the event and ran the race with friend Julie Spenceley.

Catriona said: “It was an absolutely amazing event and although I was nervous about it I enjoyed it far more than I expected.

“I had been quite serious about my training and I did a 34-mile run as my longest run before the event.  However, you never know how you will cope running as far as 53 miles and with so many hills.

Julie and Catriona run together.

“But it was really magical on the day. We took it very steady and ran as much as we could with a few slower sections on the hills and when we needed to eat. Everyone was so friendly in the race and the support and organisation was incredible.

“We had a lot of fun actually and although I was extremely tired towards the end I knew I would do it. I am so grateful to Julie for training with me and running the Fling with me as well.

“This race has inspired me to do other ultra races.”

The relay race is a firm favourite within the race and it perfect for for those who are keen to participate in what is now a great family friendly day out.

The male team podium was made up of Bellatubbies in 6:57, Maryhill Harriers in 7:30 and Dick Vet Aces in 8:21. It’s worth pointing out that none of the relay teams beat the overall winner in the solo race.

The podium female teams were Carnegie Chicks in 8:15, Which Way to Tyndrum Again in 8:28 and Glenpark Blister Sisters in 8:37.