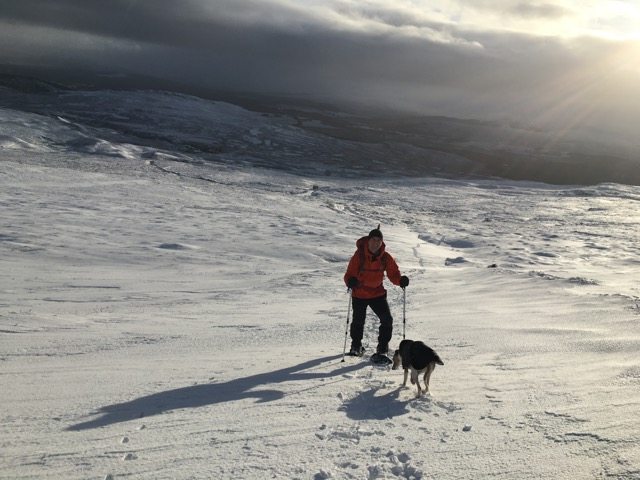 Wispa sets the route for the snowshoers.

My friend Rob and I were keen for a winter mountain snowshoe outing. We decided that the Cairngorms would be a good destination and Rob chose the Corbett Carn an Fhreiceadain from Kingussie.

It seemed like the ideal walk for a winter’s day because it would allows us to finish in daylight. The Walk Highlands route description reckoned the route of 11.25 miles and to a high point of 878m would take some four to five hours.

In addition, it was attractive because neither of us had walked the Corbett before and with Wispa the Wonder Whippet coming, too, I needed a walk that was within her capabilities.

Here is what happened on our hike of the Corbett circuit.

The walk at the start was on tarmac and then trail through woodlands.

Lesson 1: Don’t be deceived by calm at ground level

Just because it looks like a lovely calm day, it doesn’t mean it will remain so at higher altitude. The wind as we ascended the north and north-easterly track from the Highlands town of Kingussie picked up and became relentless. It blew very cold into our faces and wrapped around our heads. 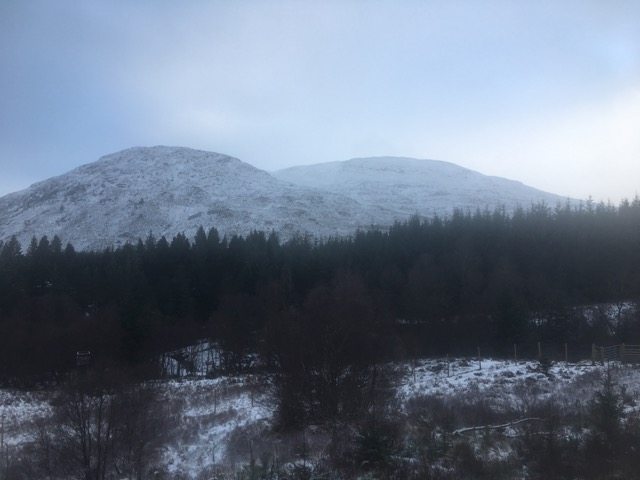 As we climbed higher the wind whipped up.

Lesson 2: Not all snow is good for snowshoes

Walking in snowshoes is a great aid on deep snow but only when it is consolidated. The track towards the first summit of Beinn Bhreac at 843m featured a huge amount of snowdrift.

This snow was soft and light (perfect for skiing!) but in snowshoes it meant the going was laborious. Even in snowshoes we found we sunk into the light snow and then we needed to lift out our snowshoes to take another step.

We both found it quite a slog. Thankfully, the views were lovely and we found excuse after excuse to stop to take yet another photo (and catch our breath).

The view from a private bothie discovered on the walk.

Wispa sets the route for the snowshoers.

Lesson 3: You can learn route finding from a dog

Watching where Wispa chose to walk was interesting. When crossing burns she found the easiest place to jump.

She also found a route in the snow that was on more consolidated snow or where the ground was not so deeply covered in snow.

However, Wispa is a lot better at jumping than us and also a lot lighter so it didn’t always follow that her route would be right for us. She did show us a few alternative options though.

Deep snowdrifts made the going slow.

Lesson 4: Walking in winter can be twice as hard

The walk that might have taken us around 3.5 hours in summer conditions ended up being closer to five in winter. Pushing through snow, stopping to add or remove layers and generally dealing with the wind and cold adds time to a hike.

Some of the extra time was also caused by a scary incident with Wispa.

Rob and Wispa on the summit of Beinn Bhreac.

Lesson 5: Try not to break the dog

Wispa is a fit, agile and determined wee whippet but she does get cold. I made sure she was as cosy as possible with a double layering of jackets.

Because she was moving alongside us, she also stayed fairly warm but as soon as we stopped she would shiver. However, this is not unusual for a whippet.

Wispa has a lot of experience of walking mountains and hills and while I rarely challenge her to walk two big mountain days in a row, I have found she is very capable of a walk of up to around 15 miles and including one or two Munro summits.

However, I had not foreseen the depth of snow on the Corbett, nor the extra time it would take to complete the walk in tricky winter conditions.

For the first time in Wispa’s life she stopped walking during the hike. She has been tired previously but never has she stopped and refused to carry on.

The views were lovely.

Never miss a chance for a Man Leg on a summit (at the top of the Corbett).

Everything had seemed fine as we reached the cairn of Beinn Bhreac and then on to the Corbett cairn. Between the two summits the wind was at our backs rather than in our faces and this was a huge relief.

The snow was also a lot more compacted on the high plateau and in snow shoes we made good progress. Wispa spent her time tucked in behind us, keeping up and sometimes treading on the backs of our snowshoes.

But it was as we started to descend from Carn an Fhreiceadain that I started to worry about Wispa. While Rob and I were able to stride out downhill in our snowshoes and stay mostly on top of the snow, Wispa was struggling badly. I had never seen her seemingly so tired.

At one point we turned back to see that she was quite a way behind. I thought she needed more food so we stopped for sandwiches, snacks and water. This revived us all and we plodded on again.

But about five minutes later Wispa stopped still. She would not come to my call and we had to retrace our steps uphill to reach her. By this point, she was trying to make a bed for herself in the snow. Again, I have never seen her doing this.

I was very shocked and worried and we decided we would carry Wispa for a while. In fact, we had no choice but to do so. At first we carried her in our arms, taking turn about, and then Rob suggested he would carry her on his shoulders.

I didn’t imagine Wispa would lie still enough and in ordinary circumstances she would to tolerate being man-handled on to the top of a rucksack and over someone’s shoulders.

She seemed so tired that she was happy to be draped around Rob’s neck with her legs on his shoulders. She lay there, quiet and restful. It seemed like she naturally knew it was the best thing for her.

The sight of this only made me feel more wretched.

Had I led my beautiful, fabulous, loyal Wispa to the point of almost collapse? Had my judgement been so misaligned with what she could cope with? Should I have noticed long before that she was in difficulty?

I do not have the answer to these questions, except to say she has never shown any signs like these before. I felt terrible and I still feel chastened but I did not think this particular walk would be too much for her (and I base this on previous experience.)

As we walked, Wispa looked so snug and really rather happy to be carried like a princess. She made me smile again as she started to look a bit livelier.

Rob was truly our hero. I could not have managed to carry Wispa so far and he did so with a rucksack on his back, too. He did all this with good cheer and helped me to feel better about what had happened.

After several kilometres, Wispa seemed revived. She started looking around more and spotted wildlife. As she began to wriggle more, Rob thought we should pop her back on the ground. Wispa appeared to be fine again and she trotted alongside us for the final kilometre or so back to the van.

As soon as the door opened, she climbed up on to the bed and went to sleep.

Lesson 6: The symptoms of hypothermia

After telling G about what happened he suggested Wispa might have been suffering with symptoms of hypothermia. This includes being very tired and sleepy. It seemed her natural instinct was to curl up in a ball and sleep in the snow. However, this would have been a disaster for such a slim dog.

Giving her food may well have also contributed to her increased symptoms because the digestive system would have required increased energy, therefore further tiring Wispa. Only after some rest did the food aid her recovery.

Because Wispa can’t tell us how she feels we can only guess and feel very thankful that she is fully recovered. I have given her extra food and attention since Saturday and she appears to be back to normal.

I have learned a very big lesson in what Wispa, now aged seven, can manage in winter conditions.

Wispa enjoysed her spot by the stove when we arrived home.

Lesson 7: It is not just my error of judgement

I blamed myself for endangering Wispa but having spoken to other dog owners some have been similarly caught out by the weather and conditions. You learn from your mistakes, both for your own safety and that of others, so I did learn a huge lesson on Saturday.

Wispa truly loves the snow and she really enjoys walking with me but if there is more than an hour of running through the snow I will not be taking her in future.

Lesson 8: Being outdoors lifts the spirits for sure

Despite Wispa’s exhaustion and the challenge of walking in winter conditions, I returned from the hike feeling very uplifted. I am not a big fan of the first weeks in January because I find them to be dark and dreary generally but a walk with a friend, with great chat, fabulous views and in the very special surroundings of Scotland made me feel so much better.

What have you learned while walking in winter in Scotland?