Continuing my journey on the new South West Coastal 300, the third part of the journey takes me from Sanquhar in Dumfries & Galloway back to my start at Kippford.

To find out about the first part of my travels on the SWC300, see Kippford to Portpatrick.

To find out about the second part of my travels on the SWC300, see Portpatrick to Sanquhar.

The third driving route to be established in Scotland, the SWC300 follows the North Coast 500 and the North-East 250.

The SWC300 is a circular driving route that travels through Dumfries & Galloway and into South Ayrshire and East Ayrshire.

I awake to a sunny third day of my SWC300 trip and take the opportunity to drive the convertible Triumph Herald with the roof down.

I pootle into the historic Sanqhuar village, located on the picturesque River Nith, feeling a little like a movie star (heads turn and faces smile at the cute light blue Herald and an insanely grinning driver with her hair flying out form beneath a buff, wrapped up in a deep-winter puffs jacket.) 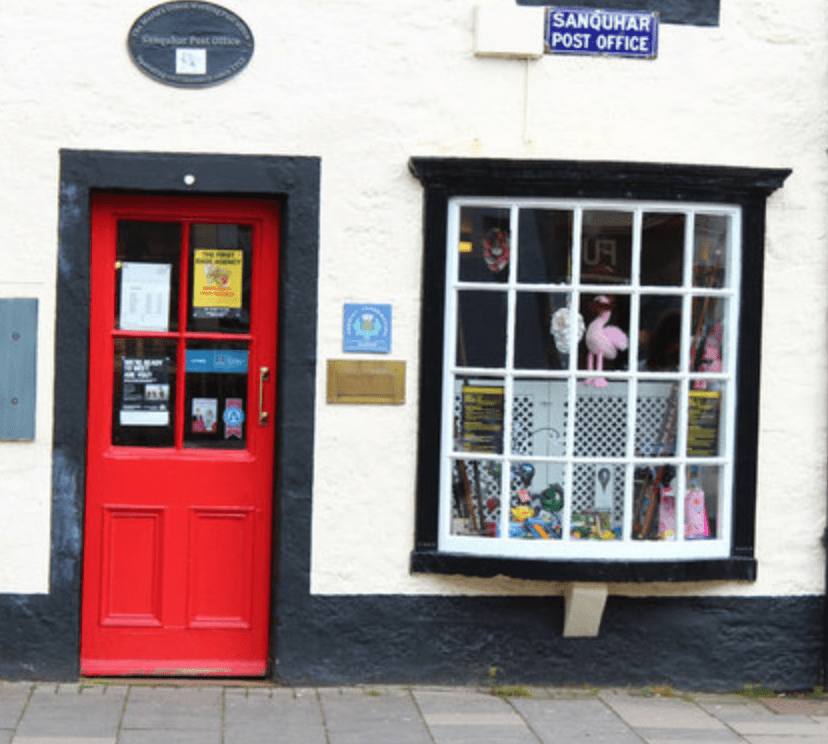 Sanquhar’s claim to fame is the world’s oldest post office, dating back to 1712. Of course, I walk the main street to gaze up at the old facade.

Perhaps lesser known (certainly to me) is the Sanquhar Pattern, a geometric-style of knitting pattern peculiar to the area.

A shop selling knitted items, such as gloves, scarfs and hats, draws me in although my eyes water when I see the prices. This is a highly specialist and, presumably intense, knitting process but I am pretty sure I would spend a fortune only to lose a glove two days later.

Now where? Again, there is an array of great attractions to pick from. Crawick Multiverse, a fabulous land art project by the landscape architect and designer Charles Jencks, is close by. It is a brilliant place to stroll and admire on a sunshine-filled day.

Wanlockhead is not far away, too. It claims the title of Scotland’s highest village, which seems strange given that it is in the south of Scotland and not the Highlands.

Again, I drive as if in my own movie set. I love the feeling of the sun’s rays on my face, the Triumph’s heater toasting my legs and feet and my hair flying wildly around in the wind as I make the winding ascent of the B797, turing off the A76 at Mennock, towards Wanlockhead.

Wanlockhead and nearby Leadhills, both situated high in the Lowther Hills, are famed for their mining heritage, including gold and lead, and a small museum is worth a visit.

Joining the A7040 after Leadhills, signposted for Elvanfoot, I thoroughly enjoy a  superb remote-feeling descent on smooth tarmac, the rounded grassy hills of the Lowthers curving gently up and down beneath a blue sky. This is surely the scene that a convertible classic car was created for.

I discover that Elvanfoot is in fact a small village in South Lanarkshire and located at the confluence of the River Clyde and Elvan Water. The SWC300 joins a road heading south, following the route of the Clyde.

But, there, suddenly is the A74(M), noisy and busy with modern-day traffic. There is no way I want to take Bluebelle into that high-speed mayhem.

I panic, stop to look at the SWC300 map on my phone and realise, with huge relief, that the route follows far quieter roads. While the B7076, then the B719 and A701 are close to the motorway, they are remarkable devoid of other vehicles. 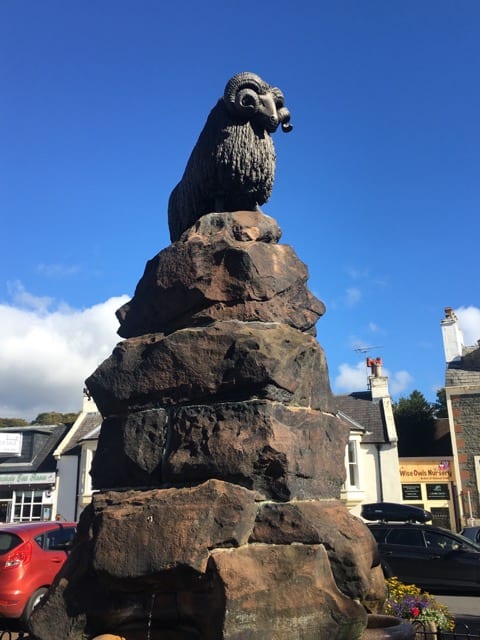 The famous statue of a ram in Moffat. It is minus its ears.

An array of sweet jars in the Moffat Toffee Shop.

I can never resist a visit to the spa town of Moffat and I am delighted that the SWC300 takes a short detour to this tourist hotspot. Does anyone go to Moffat and manage to avoid the fabulously nostalgic Moffat Toffee Shop?

I wander the aisles trying to narrow down my selection of sweets, mostly influenced by memories of childhood when I was allowed to occasionally pick a quarter of my favourite boiled treats.

These days the measurements are metric but the shop assistant obliges my trip down memory lane and weighs out sherbet pips, soor plooms and mixed boilings in imperial weights.

Did you know?: There is a replica spitfire aircraft that has been built in the garden of a house in Moffat.

Enjoying a takeaway coffee and cake while siting in the open top Triumph I again enjoy a movie star experience as locals and tourists alike come up to tell me the Herald was their first car, or that they can remember their parents owning one. It is a wonderful talking point and I only start to forget to mention that it is not my car.

From Moffat, the SWC300 continues on the A701 to rejoin the B7076 heading south for Lockerbie. The large town is, of course, known to most people for the Pan Am flight disaster in 1988 when a bomb exploded bringing down the plane and killing all passengers and crew, as well as 11 residents.

The tragedy is remembered in a number of ways with stained glass windows in the Town Hall displaying the flags of the countries whose nationals were killed, a Garden of Remembrance and Lockerbie Air Disaster Memorial. 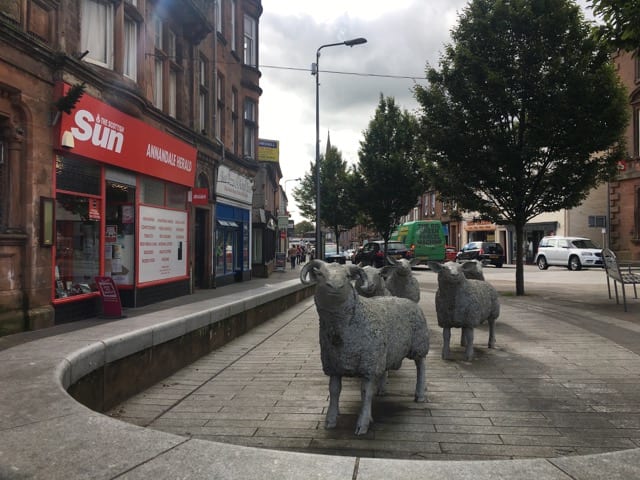 Leaving Lockerbie, the SWC300 turns west heading towards the coast again and offering the opportunity to pop into the town of Dumfries.  Attractions such as Robert Burns’ House and Dumfries Museum could easily entertain for a day in this busy town.

However, I have a meet-up planned for a picturesque village called New Abbey, to the south of Dumfries. One of my old school friends lives locally and we have promised each other a quick catch up before he needs to be home as his kids come out of school.

Mike is a photographer and he only adds to my dropped-into-a-film-set dreams by standing in the middle of the road snapping photos of Bluebelle as we arrive into the village.

New Abbey is famed for Sweetheart Abbey and although it is now in ruins the setting is very atmospheric. If only I had planned ahead an packed a picnic basket! Instead, Mike and I enjoy tea and scones and a high-speed catch up in the next-door cafe.

The abbey was built in 1273. It was named Dulce Cor in memory of Lady Dervorgilla, who founded the building in tribute to her beloved husband, John Balliol.

The route returns to the Solway Coast offering fabulous views as far afield as the Lake District.

A short detour at Kirkbean reveals one of Scotland’s oldest lighthouses at Southerness. The views from the top are apparently awesome but you need to be lucky to find the building open to the public.

If it is closed don’t worry. The SWC300 soon reveals further coastal vistas as it hugs the coast and passes through Sandyhills with its beautiful beach. 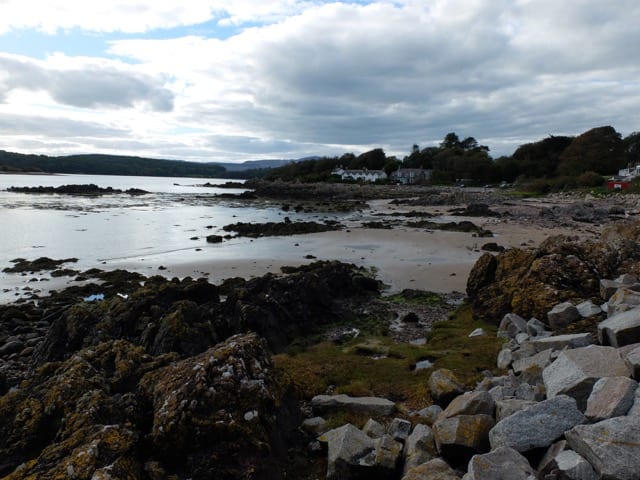 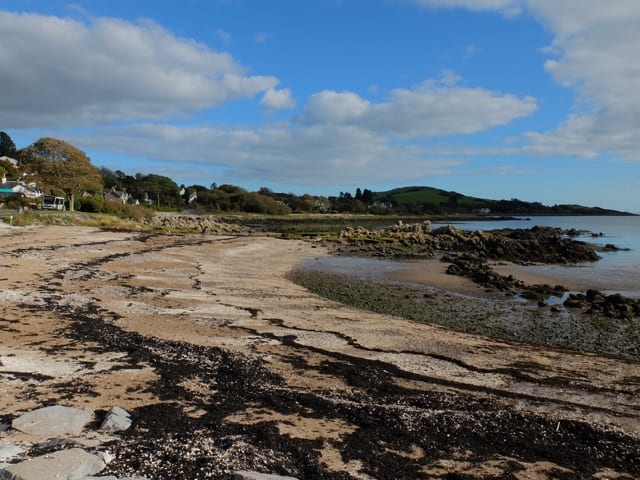 At Colvend, a detour to the pretty village of Rockcliffe is a must. The stunning rocks-and-sand bay is just about the most picture postcard perfect village bay I have come across in Scotland.

You can also take a lovely short coastal trail on foot, the Jubilee Walk, from Rockcliffe to Kippford.

Sadly, my time with my fabulous companion, Bluebelle, is almost up. I drive through Dalbeattie (I am familiar with this town thanks to a series of 7stanes mountain bike trail centres in the area) and back towards Kippford.

I speak to the car as if she were a person, bidding her a fond farewell, and then I climb back into my 2011 built VW campervan. I feel suddenly very high up and with a surprisingly light touch on the accelerator I rejoin the world of driving at speed on the busy M74 back to Glasgow.

I wished I could have stayed longer in a region that must surely be one of Scotland’s best-kept secrets.

Other places to visit: