When do you become an official Munro or Corbett bagger?

It was only when I passed the half-way mark in a full round of 282 Munros that I started to imagine I might finish them. But, until that point I wasn’t an official “bagger”. I simply enjoyed hiking Scottish mountains and if the Munro happened to be a new one I would tick it off the list.

Recently, I have been hanging out with people who have finished a round of Munros. After being so focused on the end-goal, I have noticed that they suddenly become shy of saying they are committing to a new challenge.

Many of these experienced baggers continue to walk mountains but they seem reluctant to say if they are going for another Munro round or starting on a different round, such as the Corbetts.

I have enjoyed the banter of conversations such as this:

Friend: “Do you fancy a day of walking soon?”

Friend: “Oh, I don’t mind. We could walk one of your outstanding Munros or there are a couple of Corbetts that I quite fancy.”

Me:”Oh, are your ticking off Corbetts now?”

Friend: “No, Not at all. It’s nice to walk new mountains and the Corbetts are in a convenient location. But, if you want to do Munros, that’s fine.”

Me: “No. That’s fine. My Munros are all many miles north so I don’t mind a Corbett. I bet you are ticking off a round of Corbetts now, though.”

A gate in the middle of nowhere… to another Corbett.

And so it goes on. I have several friends saying similar, including Rob and Gus, who I was walking with on Sunday in the Glen Lyon area on the Corbetts, Meall Buidhe and Sron a’Choire Chnapanich.

While ascending Meall Buidhe we met a random walker, Hugh. The Corbetts are rarely busy mountains, so we were surprised to bump into him.

I immediately asked Hugh if he was a Corbett bagger. He didn’t want to commit to this idea, although he did tell me he had finished a round of Munros. He said: “I am not sure if I am going to walk all the Corbetts but I set myself the target of doing 50 Corbetts after finishing the Munros.

“I chose Corbetts that other people had told me were the best. I am also walking Munro repeats; the ones that I walked before but maybe didn’t have the best weather that day, or the ones I most liked and wanted to do again.”

So, Hugh wasn’t admitting to being an official Corbett bagger although he seemed pretty intent on ticking off both Sron a’Choire Chnapanich and Meall Buidhe, in the order, that day.

Rainbow on the Corbett, Meall Bhuide.

This started a conversation with Gus and Rob. Gus is hoping to complete his first round of Munros fairly soon. He has about 20 or so to go. His 18-year-old son Marc has 42 to go. They have walked all of Marc’s Munros together and the aim is to finish the Munros at the same time.

Except, just now, Marc has a knee injury so he can’t walk Munros. Which is why Gus is now ticking off Corbetts on his own. “But I don’t have a plan to do a full round… Yet,” he told me. “I wouldn’t say I am a Corbett bagger.”

It was interesting that Gus knew exactly how many Corbetts he had bagged so far: “29,” he said as soon as I asked. “It will be 31 next weekend hopefully, after I walk another two,” he said. 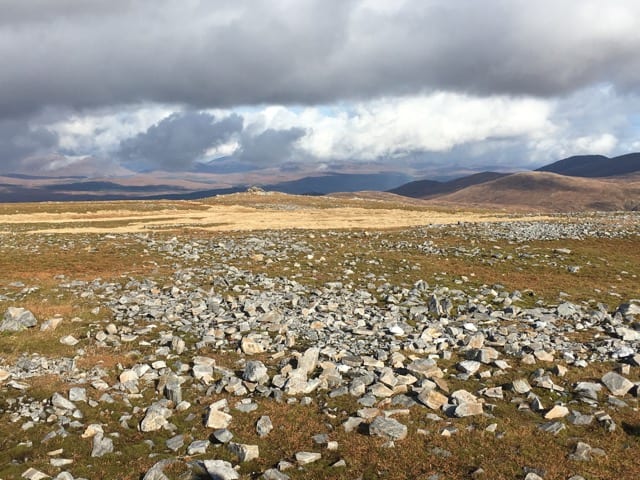 Superb views towards the Fort William area en route to the second Corbett.

Rob also appeared to be a Corbett bagger in denial. Although I did get him to admit, eventually, that this might be his new hiking hobby. Rob said: “The honest answer is probably that after about the third Corbett I decided I’d do them all in the end, at least hopefully I will.

“At that point, I’d only done a handful of Munros so they were my priority, but I’d always try to add a Corbett or Graham while walking the Munros, when I could.

“Having said that, I’m not massively focused on the Corbetts. I’m much more laidback about it than I was with the Munros. I’m perfectly happy to go and do Munros with people. Since I finished my Munro round I’ve done about 60 repeat Munros but I’ve only added about 25 Corbetts to my total. I’m on 82 Corbetts now.”

Gus and Rob absorbed by the views through their camera lenses.

I think this is interesting. There will no doubt be people who finish a round of Munros or Corbetts and move determinedly on to the next round of hills. For example, Hazel Strachan wastes no time in going on to her next round (now number 10, I believe) after finishing the previous round. She walks a round every nine months or so.

But for many people, once they finish one round they appear undecided, for a while, about what they might do next. Another round of Munros or a new round… Perhaps it’s when they start to look at the lists and realise the number of Munros or Corbetts that they have banked already they feel the idea of a new goal coming on.

Who knows? These days, I find myself walking as many Corbetts as I do Munros because of my friends but I am definitely not a Corbett bagger… yet!