Am I mad? Running solo after dark 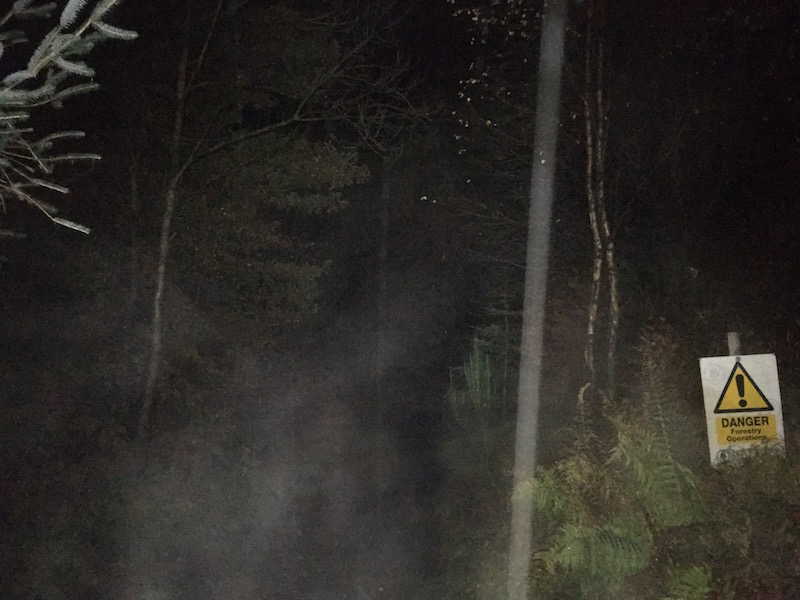 I run at night on my own with only the company of a headtorch and my whippet. (Note: The whippet is not a feisty guard dog.)

Why do I run solo at night?

In Scotland, we have long winters with more than our fair share of dreich weather and darkness. Rather than moaning about this and sitting at home, I get out for a walk or run and I use a headtorch to guide my way.

I have friends who often join me for night runs but they are not always available and this means I have a choice: Run in the day if I can find time; stay at home and feel low and annoyed; or run on my own.

I really enjoy running by headtorch because it creates a different type of challenge and atmosphere. Routes that I have run many times on local hills or in the nearby country park seem different and more adventurous when lit only by my headtorch.

I love my headtorch. It is one of my favourite items of kit. Maybe this will seem rather sad to others but it is a headtorch that is a brilliant size (small) and weight (very light). It also boasts a beam intensity that is rarely beaten by other people’s headtorches. It is the Silva Trail Speed Elite.

My headtorch was expensive so I like to use it.

Should I worry about solo running at night?

Usually, when I mention that I run solo at night, people ask me if I worry about the dangers. Women, more than men, caution me about stranger danger or having a mishap while running on my own.

I confess that I try not to think about such dangers. I often run on my own in the daytime and on sunny summer evenings. I don’t feel like it is any more dangerous to run after dark.

Perhaps there are greater dangers of tripping over in the dark and it can be colder at night in the winter so that has potential concerns, but, then again, my headtorch has a bright beam and I could just as easily trip and fall in the daytime, too, so I am not bothered by the darkness.

Should I worry about been attacked? Gosh, I really hope I don’t need to be too concerned about this. If I worried about this in general, I might well stay at home. I think there are more dangers in built up areas with higher populations of people than in the middle of the countryside.

I haven’t checked the statistics but I have rarely heard or read about runners in the Scottish countryside being attacked by other humans.

Do I get scared at night?

This is the next question that people ask me when I run solo at night. I have occasionally been a little spooked by the noise of a wild animal or suddenly seeing the eyes of wildlife.

Once, a dog jumped out of the undergrowth near a house and gave me a fright, but the same would have happened in daylight.

When I get spooked I try to quickly control my thoughts and not let the incident scare me. I actually enjoy night-time running and I would really like no to be too scared.

I have felt my safety threatened only twice in my life while running. The first time was when I was chased for a short way by an idiot (probably high on drugs or pissed) when running home from the office, when I worked in Glasgow.

It happened in Maryhill and I simply upped my pace. He didn’t even try to chase me after the first 10 metres. It was a little frightening but because I knew he was weakened/behaving stupidly by drink or drugs I didn’t let it bother me.

More than a decade ago I had a bit of a shock when a woman was raped and murdered near the River Kelvin on a route that I used to regularly run to work. That day, I had chosen, by chance, to run on the road route rather than the Kelvin route. The woman was attacked around the same time that I normally run that way.

I have no idea if I would have been a target, too, but it felt like a close encounter with badness. It was also close to the city and in an area that I have often found rather ominous due to some of the people that frequent it.

I avoided this route for months after this. After the incident this area of the River Kelvin/canal was re-landscaped to be more open and less foreboding.

But these incidents were not in the countryside, in the hills and parks, where I normally run at night and so I feel that I am relatively safe to run at night on my own.

Why the hell should I not run solo?

There is another point to make on the subject of running solo and running solo at night. Just because I am female, I don’t want to feel as though I can’t run on my own, whether in the daytime or at night.

It annoys and frustrates me that there is the idea that women should be more scared of doing things on their own because of the perceived potential threat of danger. I am imagining that these threats include the dangers of being attacked by a man; and a random nasty man at that. Most men/people are lovely.

I have travelled on my own, ridden my bike on my own, walked mountains on my own and run on my own. I like my own company. Just because I also walk and run at night, I don’t think I should have greater concerns about my safety and well-being.

What are your thoughts?