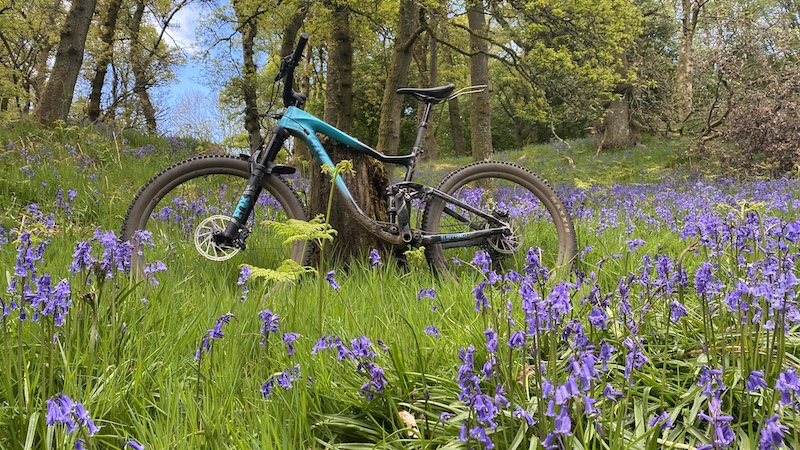 Well, I suppose I am the Auld Wife, which made a mountain biking and walking birthday adventure to visit an Ancient Scotland site, the Auld Wives Lifts, both poignant and inspired.

The background to our adventure

Hubby G grew up not far from where live and, as a young cyclist, he recalls visiting the Auld Wives Lifts, near Torrance, in East Dunbartonshire. His friend, also called Gordon, spotted them marked on a map.

Hubby G has occasionally talked about the Auld Wives Lifts but all too often, prior to lockdown, we would have other places to visit and most were not local.

During lockdown, I have been discovering new routes, trails, views and attractions locally, so G knew I would enjoy an adventure to visit the site, which turns out to be very close to our home.

Added to that, I am older than G so that makes me the Auld Wife!

What is the Auld Wives Lifts?

This is what Ancient Scotland states: “High on Craigmaddie Muir is a natural amphitheatre in the peat bog. Within that bowl are a pair of very large boulders with a third balanced on top. It looks not unlike a burial chamber with the capstone still on top, but it was almost certainly left this way by a glacier.

“Some of these look relatively modern. And whilst it’s not possible to date the carvings, some of them look much older and are in a classic Celtic style perhaps dating to the Iron Age. Celtic heads are often associated with water – and today this is one of the wettest parts of a boggy location.”

According to the Modern Antiquarian, the name derives from this story, although they stones are clearly formed by natural forces: “The traditional account of this monument is, that three old women having laid a wager which of them would carry the greatest burthen, brought in their aprons the three stones of which it is constructed, and laid them in their present position. Verily, there must have been giantesses in those days.“

Also, another story of absolution of sins, or fertility...: “Between the upper and the two lower stones of this monument there is a triangular opening from east to west which, if passed through according to the course of the sun in a truly penitential spirit, was formerly believed to have procured complete absolution for previous sins.

“…And superstition still holds it necessary for all strangers visiting this enchanted place for the first time to creep through it if they wish to avert the calamity of dying childless.”

It would have been possible for G and I to head straight to the road close to the village of Torrance that gives access to Craigmaddie Muir. It is probably around 6km by road. However, we fancied more of an adventure on our mountain bikes.

We followed a route that I have completed a few times before, via Mugdock Country Park and the West Highland Way, then to Strathblane and on to the former railway line, now the Strathkelvin Railway Path.

At Lennox Forest, we climbed up and up, cycling in a generally southerly direction. We followed tracks we have ridden before and then checked the map for new tracks so that we could then descend towards Torrance.

This is a route I have cycled several times before: https://osmaps.ordnancesurvey.co.uk/route/4713100/Mugdock-and-Lennox-Forest-loop

This is an alternative route. Similar but with a few different trails and a quicker return by road. There is a small “inner” loop that is the hike to the Auld Waives Lifts and a nearby trip:

A great memory for routes

G remembered the approximate route and, brilliantly, he knew exactly where to stop on the quiet back road near Torrance to access the Auld Wives Lifts.

We locked up our bikes and left them next to an old war bunker in a farmer’s field. We swapped cycling shoes for trainers and then started the walk up a gentle slope across farmland.

It is important to respect the farmer’s requests to keep all dogs on a lead.

There is the outline of a track to start with and then we simply walk towards the top of a small hill. G knew the general direction but you can follow the section of my Strava route if you are unsure. It is the internal loop of the larger outer loop.

As we strolled uphill, we were treated to beautiful views of the surrounding countryside and over Glasgow. The city’s tower blocks were easily seen and while ugly to some, I actually like this view. I love the contrast of Glasgow’s cityscape with the nearby rolling countryside.

Note: Beware the electric fences on this farmland. We didn’t see any signs about this and G ended up with a nasty wee zap.

The distance from road to Auld Wives Lifts is about 1km and around 70m of ascent. It is not possible to see the three stones until you are almost upon them. They are set in a small amphitheatre of boggy ground, although because of the dry weather over recent weeks it was amazingly “unsoggy” underfoot.

As soon as we spotted the Auld Wives Lifts I was instantly impressed. A huge boulder lies on top of two others and as we walked closer we could see all the graffiti. It is incredible to think that the engravings have been made over some 200 years. The carvings of the faces are amazing and most likely some of the oldest “graffiti”

There were engravings and messages from the 1800s and also several much more recent – and inevitable – “initials”. I spotted some from the 1980s, which are actually “historic” now.

A series of natural looking steps made it possible to climb the rocks to sit on the top. G and I climbed up and sat for a while enjoying the views and also thinking about the history of the place.

Looking across to a nearby rise in the landscape, we were fairly sure we could see a trig point. I love a trig and so we added a bit to the adventure by extending the walk.

The trig was a superb find – and offered fantastic views, taking in the Campsies and Ben Lomond, probably the Arrochar Alps, too.

It was a little windy at the trig, so we found shelter at a nearby crag. I decided it was the ideal place to do my Facebook “25 press ups each day challenge” (to raise awareness of mental health issues), before enjoying a quick wee bottle of birthday fizz.

My Strava route reveals that we found the quickest return route on the roads. There are many other ways to get home on trails and off-road paths but I had a drinks date with friends on Zoom.

The total distance was 32km, including mountain biking and walking.