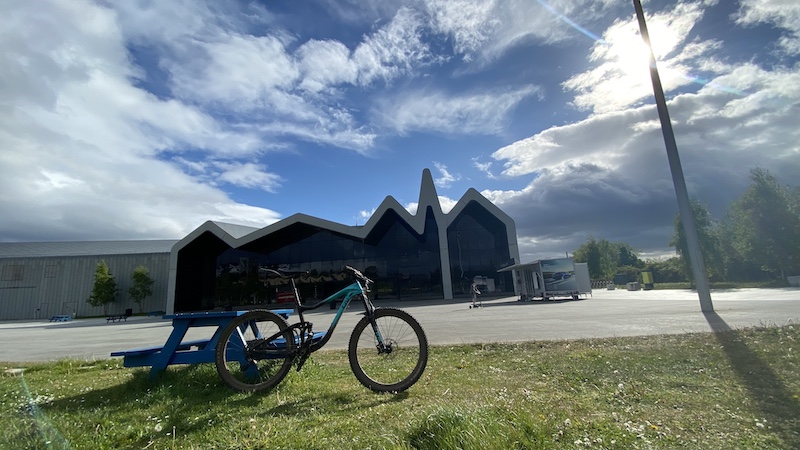 This cycling route joins Glasgow with my Milngavie Bike Circuit route. It starts in Glasgow at the River Clyde. The Clyde routes is the National Cycle Network route 75.

The Glasgow rivers and parks mountain bike route begins at the Riverside Museum (Glasgow’s transport museum; free entry) on the Clyde. The Tall Ship is located here, too.

You need to follow signs for the Kelvin Way (part of NCN 756). There is some sign following and zig-zagging through the streets but once you know what to look for it’s fairly straightforward.

The Kelvin Way heads through Kelvingrove Park and then along the side of the River Kelvin, winding north towards Milngavie.

The route is on tarmac and it can be busy with walkers and other cyclists, so make sure you have plenty of time to be respectful of others on the same route.

The further you ride from the city, the quieter the route becomes.

Keep an eye on your watch or bike GPS because at aorund 7km, you will turn off the Kelvin Way over a bridge and inot Dawsholm Park.

From here you follow a clockwise loop via the communities of Bearsden, Milngavie, Summerston and Maryhill.

You’ll join the Allander Way, aong the banks of the River Allander, before cycling again on to the kelvin Way.

The route passes through many more parks, including Cluny Park, Lennox Park and Maryhill Park, as well as Balmuildy Woods.

It’s a route that is close to urban life and homes, yet seemingly distance thanks to easily accessible countryside.

See the video for details of the route:

Beware: There are busy road crossings; route may become overgrown in midsummer in places.

See Strava: Glasgow to Dawsholm Park on the Kelvin Way and Milngavie loop: Rivers and parks.