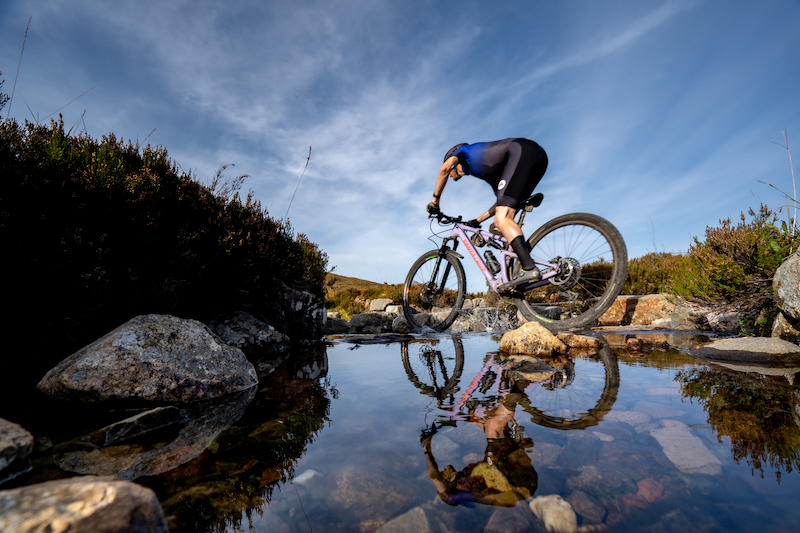 There is exciting news this month as Scottish champion mountain biker Rab Wardell announces he has set a new West Highland Way record. The Glasgow-based cyclist completed the 96-mile trail ride from Milngavie to Fort William in an astonishing 09:14:32.

But the 35-year-old had to keep his record ride on September 18 a secret until last week when a film that follows his journey was released. The Cut Media film, partnered by Wahoo, showcases Rab’s impressive bid on Scotland’s most famous long-distance off-road route.

Speaking to Rab today, he told me: “It was a hard secret to keep and there were a few people who knew I’d broken the record. However, we wanted to wait until the film was launched. Now I am excited to be able to tell everyone.”

Rab believed that sub-10 hours was possible. Then, just weeks before his attempt, Gary McDonald, of Fort William, set a new record of 9:28.

Rab, who lives with Olympic champion Katie Archibald, said: “I had heard a rumour that Gary might make a record attempt and his time excited me. I wasn’t sure if I could beat his time but I knew, then, it was possible to do a fast time and to go well under 10 hours.

“I felt very prepared for my own ride. I had not trained so hard or with such purpose for years and I thought that a good time was well within my capabilities if it all went to plan and nothing went wrong, such as mechanicals or the weather.”

Key to Rab’s record time were pacing and fuel. He said: “When I did the West Highland Way the first couple of times I took a more casual approach. This time, I knew what pace I should be doing and I was very serious about my fuelling.

“I use Secret Training products, with high carbohydrate content, and these have helped me a lot because I was able to take in enough fuel and still have the energy to keep going for so many miles.”

Rab also trained hard through lockdown. He said: “I think that like many people, the Covid lockdown gave me the time to focus on the WHW record. So many FKTs have been set this year and probably because of a lack of races.

“I tailored my training plan towards the goal and prepared for going under 10 hours. I worked on my aerobic conditioning and fuel efficiency. I also lost 10kg in weight and my body fat reduced from 15% to around 7-8%. I felt fitter than I had been for some years.”

The West Highland Way is a challenging ride but Rab reports he rode around 90% of it. He said: “Over the past decade, the trail has improved in places, for example Conic Hill, where I am able to ride almost all of it.

“In addition, I have more experience of riding for longer and there have been some technology advances, which means I can descend better and faster on my Santa Cruz bike. I had to get off the bike for about five minutes going up Conic Hill and then for a bit on the tricky 10km stretch north of Inversnaid.

“The Devil’s Staircase included bit of hike-a-bike, too, but the rest I could ride. The trail, my bike and my experience allowed me to ride faster than a decade ago.”

While Rab had aimed for a good weather window in mid-September, he said the wind direction could have been better. He added: “Thankfully, the trail was fairly dry, though, so that made it possible to ride faster.”

He enjoyed many highlights. He said: “There was a wonderful view from Conic Hill over Loch Lomond thanks to a temperature inversion.

“I also enjoyed some great riding on the trail between Balmaha and Inversnaid.

“There is a hill just after Bridge of Orchy that descends towards Rannoch Moor and I had a fun descent. It is wide open and rocky but if you choose the right line it’s a great descent.

“But the biggest highlight of the ride was working as a team. I had support from my parents and friends and also I liked working with the film crew. My ride felt like a big team project; a passion project. I enjoyed being a part of it.”

‘Someone will go faster’

Rab is delighted to have set a new West Highland Way record, although he is sure it will be beaten. He said: “I think that sub-nine hours is possible, even a rid of 8.5 hours. There have been so many new FKTs set, from riders and runners, recently and I can see someone going faster. I hope they do.

“Part of the motivation to do this ride and the film was to inspire other people to enjoy Scotland’s trails, whether walking, running or riding.”

Rab has hopes of riding an unsupported or self-supported route next. He said: “I am keen to do a purer FKT, I think. One that is self-supported. I rode most of the 150-mile Deeside Trail this year and I might go back to that, or perhaps the Cairngorms Loop. Then again, there are still some races that I have not done and I would like to do those. I am feeling fit and I am keen to do something else.”

Who is Rab Wardell?

Rab, originally form Dunfermline, Fife, is a champion cyclists and also a cycling coach. He raced in the Commonwealth Games in 2006, where he ended up in a battle with Chris Froome. He has also been a British Championships medallist, a multiple Scottish champion, a winner of Race The World USA and represented his sport as part of Team Scotland and the British Cycling Team. See Rab Wardell.