A new Corbett, Hart Fell – and my friend’s last Donald 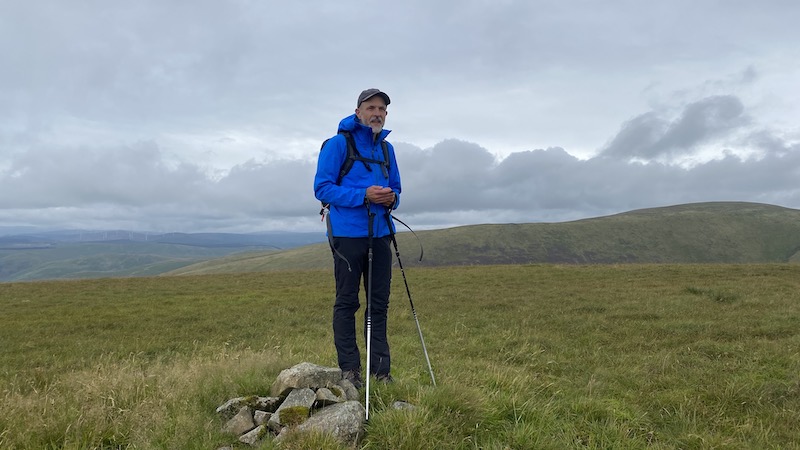 My friend Ben and I walked a 13.5km circuit in beautiful rolling hills near Moffat, in southern Scotland, to bag the Corbett Hart Fell and also to tick off his last Donald.

Travelling from Penrith, where I had enjoyed a catch up with a friend and her family, and heading north to return home to Inverness recently, I decided to pull off the M74 at Moffat and meet Ben for a new summit.

Hart Fell is 808m in height and lies in the Moffat Hills range, which is part of Scotland’s Southern Uplands. A horseshoe route also takes in two Donalds, Swatte Fell and Under Saddle Yoke.

It was Ben’s second venture to these hills but he was very happy to return. He told me: “When I walked this route before I was sure I had reached both Donald summits and the Corbett. But when I looked at the map later and referred to descriptions of Swatte Fell, I wasn’t entirely sure I had.”

Since then, Ben had reached the summit of every other Donald and Donald Top and so we decided to treat the walk as his “Last Donald Celebration”. He packed small bottles of Babycham – somehow Babycham had become the drink of choice for his Donald compleation (correct archaic spelling) – and met at Moffat to then drive to the start point for the Hart Fell horseshoe start point.

Read: What I have learned about the Donalds.

This is a great walking route through beautiful southern Scotland hills. It is an easy-going hike for a Corbett and on obvious trods (apart from those dastardly Donalds!).

It could entirely see why Ben was happy to return to the circuit. And when we tried to ascertain where Swatte Fell is, I could also see why he had his doubts about reaching the right point before.

We wandered about the fell, trying to find signs of a cairn and wondering if we were at the highest point or not. In the end, we had walked to almost every point that the 728m summit could possibly be located at – and we decided Ben had definitely compleated.

Cue the hilarious decision to open the mini bottles of Babycham (actually a great drink for a walk) at a seemingly random place on a hill.

Still, it felt very poignant. Ben had started his quest for Donalds several years before, when he decided to take up hill walking. He thought the Donalds would be a good goal for becoming hill walking fit and gaining navigation experience.

On to Hart Fell

After lunch and Babycham we continued north to reach Hart Fell, marked by a very obvious trig and then completed a circuit to the east of Blackhope Burn over more stunning hills.

We met only two other people and caught up on all our chat while enjoying constantly wonderful vistas. This is a great Corbett (and two Donalds).