What I’ve learned… by a Donald compleatist 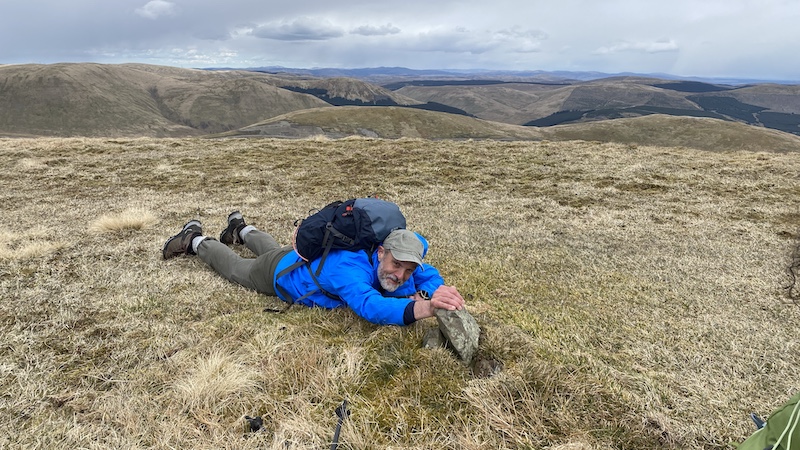 Ben holds on to the huge (ha, ha) cairn on the Donald hill.

I usually walk Corbetts with my friend Ben. He has also been ticking off the Donalds over the past few years. Recently, he became a Donalds completist. I asked him what he has learned about the Donalds:

The numbers are intriguing

The Donalds are a list of the hills in Lowland Scotland with a height of more than 2000ft. The list was defined in 1935 by Scottish Mountaineering Club member Percy Donald. There are 89 Donald Hills and a further 51 Donald Tops.

A question of tops, or no tops

If you are planning to do the Donalds, you need to decide early on whether you are going to include the Donald Tops.

The leading walking website Walkhighlands only lists the 89 Donald Hills and I started off working my way through those. I’d ticked off quite a few before I discovered that the SMC defines a complete round of the Donalds as including all 140 hills and tops.

My conclusion that I wanted to do a complete round resulted in quite a bit of backtracking as I revisited a number of areas to pick off the Donald Tops I’d missed.

Therefore, the SMC Grahams and Donalds Hillwalkers’ Guide is invaluable in finding routes to cover the hills and the tops. (I receive a small commission for sales through Amazon.)

You will probably have most of the Donalds to yourself. Aside from some of the more popular routes, there is a good chance you could be out all day and not meet any other walkers.

This is ideal if you are in the mood for some solitude and want to avoid the crowds.

There’s something quite pleasing about the feeling that you are alone in all this wonderful, wild hill country.

You really need to focus on your navigation for many of the Donald routes, particularly if the cloud comes down as it so often does.

Fences and quad bike tracks are your friends. Fences are particularly useful because they are marked on maps and frequently run along ridges to the tops of the hills.

Looking for a cairn? You may well be disappointed

You’ll be lucky to find a cairn on a Donald. Some of the summits aren’t marked at all, particularly on the Donald Tops.

So you should be prepared to spend some time wandering around the summit area guessing where the top is, checking OS Maps as you go until you are happy that you reached the highest point.

There are plenty of bonuses

You get bonus Grahams and Corbetts when you walk some Donalds. This is because the Donalds are seen as a complete entity and many of them overlap with other hill lists.

So, if you climb all the Donalds, you also climb 23 Grahams and seven Corbetts.

Donalds help you to explore

Climbing the Donalds is a great opportunity to explore different parts of the country. They took me to some beautiful parts of the Scottish Borders, Dumfries & Galloway and The Ochils, which I might not have taken the time to visit.

If you are based in the central belt, some of the journey times are much shorter than heading up north and a good option in the winter.

The Donalds are nice and niche

While climbing the Munros becomes more and more popular, setting out to climb the Donalds feels more niche and might appeal to those who like to be different.

It can occasionally feel a bit thankless trudging over heathery lump after heathery lump but there are plenty of very rewarding walks, such as the Rhinns of Khells, The Awful Hand and the Ettrick Horseshoe just to name a few.

Climbing the Donalds was a great learning experience for me as I’ve really started hill walking in earnest over the last few years. I have built up my hill fitness and made some mistakes in a slightly safer environment than the bigger hills up north.

I’d recommend the Donalds to anyone wondering where to start or looking for a different challenge.

I’m now well underway with my Munros and my Corbetts and will be adding a few Grahams to fill that 2000ft to 2500ft sized gap in my life!